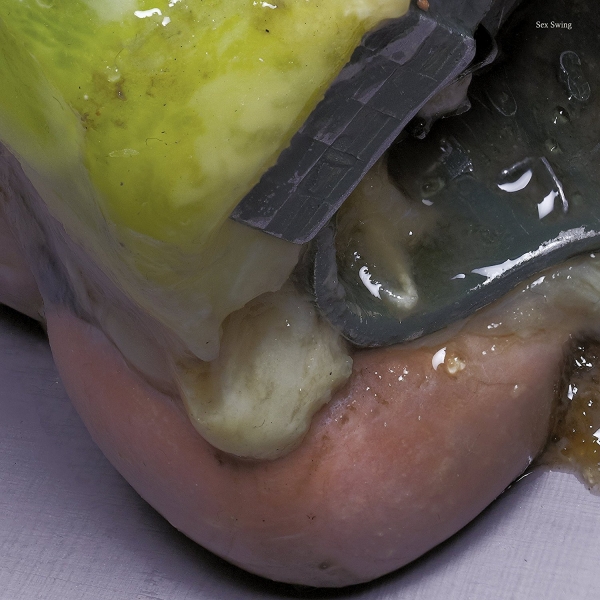 As I sit and mull over my thoughts about this, the throbbing, monolithic debut LP by Sex Swing, it’s difficult to imagine a more timely release for this record.

Unveiling itself to an audience which has so recently been battered senseless by political tumult and the passing of one of the most singular, visionary figures in 20th and 21st century popular culture, the dissonance, indeterminacy and animalistic physicality of Sex Swing feels curiously harmonious with its deeply alarming cultural context. Socio-political conditions like this are frighteningly anomalous and unpredictable – this, as we are continually told, shouldn’t be happening. Who, then, might be capable of providing a more appropriate soundtrack to this period of cultural upheaval and political collapse than a band whose very press release describes them as “the British underground supergroup who shouldn’t even exist”?

The caustic blueprint for the record is clearly audible from its outset. Opener “A Natural Satellite” is a portentous shadow of a composition, during whose 12 minutes the band don’t so much play their instruments as lurk behind them, readying themselves to weather the coming storm. On the second track, “Grace Jones”, those storm clouds gather and erupt into a thunderous gale; drums and guitars are pounded into submission, keyboards are abused with apparent glee and saxophones howl like wounded animals. Amazingly, vocalist Dan Chandler manages to find space to sing somewhere amid his bandmates’ squall, and his relatively clean delivery provides a fitting counterpoint to their violence. His words haunt the songs rather than dominate them, carefully underlining the intense pathos that lies just beneath the surface of this ostensibly brutish album; he sounds urgent, and is more than capable of hamming it up a little where necessary (as on “The Murder of Maria Marten”), but never hysterical. It is his singing that lends this record its focus, or, perhaps more appropriately, provides its anger with a target.

Genre tags are increasingly redundant things anyway, but it is strikingly impossible to pin one upon Sex Swing. At times, such as on the album’s lead track (“single” seeming too flimsy a word), “Karnak”, Sex Swing operate draw upon relatively familiar post-punk/Krautrock touchstones, the influence of acts like Neu! and Magazine springing most prominently to mind. Yet, for vast swathes of the album, their gratuitous use of shrieking feedback and monstrous percussion affiliates them more closely with the likes of supreme noise group Sly and the Family Drone, or even the coarse drone metal of Sunn O))). There are even some points at which they take more than a passing glance towards Motorhead, whose influence Sex Swing have noted in the past. Granted, these influences are hardly the most divergent touchstones for a brutal, tinnitus-inducing act like Sex Swing, but their ability to move between various forms of heavy, experimental music, apparently at will and without ever truly sounding like anyone but themselves, is remarkable.

It is an album I’m still digesting; despite its brash exterior, there is a great deal beneath the surface of Sex Swing that I feel I have yet to fully investigate. But one thing I am certain about is that we need more records like this, more bands like Sex Swing. How refreshing it is to hear the sound of disaffection and fury channelled into music as cathartic and primal as this, rather than into either the kind of disorientated rhetoric that dogs our politics or the cowardly, disengaged pap which hogs the pop charts. To be clear, I’m not engaging in some NME-style “this band will save the world” crusade. But as everything goes increasingly tits-up, acts like Sex Swing get more and more important, bastions of experimentation and uncompromising self-expression through whose music we can temporarily shelter from and better understand the pandemonium of our times.