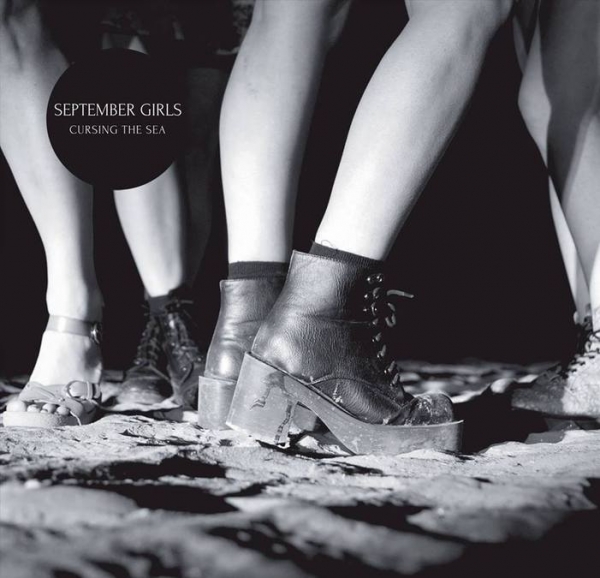 There’s a lot surrounding September Girls, even before the music, which makes them fairly irresistible and hard not to love. There’s the name: Big Star by way of the Bangles (small personal fact – the Bangles’ Everything was the first album I ever bought and I still think they’re excellent); there’s the use of the word “Girls” (see also Dum Dum, Vivian and Post War Glamour) and then finally the style, look and pure focus of this Irish five-piece that marks them out as a gang of friends that you’d love to be part of, but deep down inside you know you’d never be as effortlessly cool as them…never mind the fact you’re also slightly intimidated by a note of underlying menace.

Cursing the Sea is September Girls’ – the band is made up of Paula Cullen (bass, vocals), Caoimhe Derwin (guitar, vocals), Lauren Kerchner (keyboards, vocals), Jessie Ward (guitar, vocals) and Sarah Grimes (drums) – debut album following their formation in 2011 and release of a handful of songs and EPs (one of which was released by PINS’ Haus of Pins label) which brought them to the attention of Fortuna POP! While Big Star and the Bangles is a good starting point to cover the band’s jangle, the intensity comes from the added darkness pulled from another handful of clear influences like Phil Spector, The Cure and The Jesus and Mary Chain. Derwin’s and Ward’s guitars and vox are drenched in reverb while the real star of the record is often the gothic/psych organ drone provided by Kerchner’s fine work on the keys.

With four song writers and vocalists in the band, you’d be worried that there might be a lack of continuity, but Cursing the Sea is an incredibly consistent listen from the moment it kicks off with the turbulent title track. That number stomps in on a base of primitive drums and a melody that’s pleasingly just off-key, with the vocals muffled enough to maintain an air of mystery amid the sweetness. “Another Love Song” brings with it a sinister edge through an insistent organ line and a real gloomy bass which hints at early Cure, but also more than a nod to early garage rock thanks to the psychedelic swirl of the keys. “Left Behind” is another pulsating number, this time given a sugared edge through the layered harmonies of the September Girls’ vocalists. Not too much sweetness mind – this is still a record shrouded in darkness for the most part.

The band’s most recognisable single, “Heartbeats”, reveals their lighter side; it’s a massive pop song, all Johnny Marr jangle in the guitars and heavy on the harmonies, and a lovely shard of daylight amongst the dominance of noir; alongside “Talking” it’s the most uplifting moment on the album. It doesn’t last long as the wonky chime of “Green Eyed” and the stunning extended intro of “Ships” – doomy, enveloping bass and stop-start guitar work – brings back a darker mood.

However cloaked in black this record often feels (the closing track “Sister” deals viscerally head-on with the issue of rape with passion and extreme clarity), it’s rarely at the expense of any listening pleasure; sure there’s little let up in the mood but when the writing is consistently good you really can’t quibble about wanting more colours on the palette. Cursing the Sea doesn’t deserve to be forgotten in the post-Christmas release wasteland of January come the later months of 2014 – but then September Girls are far too promising a prospect to let such things get in their way.