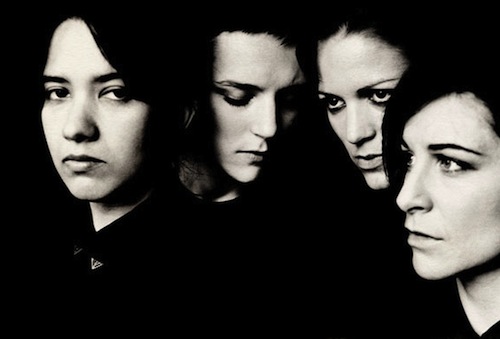 It’s with a rare urgency that post-punk foursome Savages bounded onto the scene, eliciting almost universal applause and a low rumble of fevered whispers. There was barely a shred of sound available online last year, but their name was banded around every which way by those in positions of power and anyone discussing ‘next big things’.

Methodically selecting venues for brutish, barbed performances which piqued nationwide attention, the LDN-ers have been dragged kicking and screaming into 2013 by the hype machine; part of a guitar-based class of acts due to graduate this year, the stakes have never been higher for this wave of musicians. Palma Violets stumbled with a divisive, sloppy first record at the opening hurdles, and before we get the likes of Haim and Deap Vally this summer, Savages line up to be the second of this new breed in front of the judge’s panel. Will they make it to the next round? Damn right they will.

It’s common knowledge that their overall sound isn’t the most forward-thinking – Velvet Undergound, Siouxsie and Joy Division are all blatantly namechecked – though their delivery is flawless. They’ve admitted that you’ve probably heard this all before, but that’s beside the point, as for starters musicians are hard-pressed to be completely unique nowadays (whether it’s even possible is an endless debate), but the more important factor is their message.

They’re a group with a mission, with opinions to communicate and ideals to preach. They stand up for injustice and aim to change perceptions via “Violence, domestic things and having a masculine view on feminine issues.” Perhaps the noises they’ve manufactured, although thoroughly entertaining, are derivative, but the charisma Savages ooze is hypnotising.

Silence Yourself is a collection of no-nonsense, 0% fat post-punk. It’s embellished with snarling yowls of rage, steamroller percussion and despondent guitars, but there’s nothing that seems indulgent or ‘tacked-on’. Even the Opening Night sample intro to ‘Shut Up’ (they’re not subtle about what they want from you) feels necessary, even the saxophone solo on dangerously sensual send-off ‘Marshal Dear’ is vital. The production wondertwins Rodaidh McDonald and Johnny Hostile are no doubt partly responsible for the streamlined result on the record.

Savages compel you to sit and focus on their music when you listen to it – frankly it’s hard not to – but it’s something they hammer home nonetheless, and not just on plastic; they’ve even gone as far as to ban cameras at their live shows. They’re passionate about focus and the value of silence, something evident in their sound. Even amongst distorted flails and rampant bass of tracks like ‘She Will’ or ‘Strife’, it still feels lean and skeletal and distant, made possible largely due to Beth’s reverb-laced howl.

Rerecorded breakthrough cut ‘Husbands’ is still a riveting slab of descending riffs and chugging picked bass. There are paranoid, hushed blurts from Beth: “Oh God, I wanna get rid of it…” through a myriad of shrieking axes, every bit as brutal as their moniker implies. Empowering ode ‘City’s Full’ is full of yelps and steely riffs; raw bass and muted chords captain the sonic voyage as it careens through haunted, bolshy choruses pining for fiery love based on avoiding apparent ‘perfection’: “I love the stretchmarks on your thighs/ I love the wrinkles around your eyes.”

Silence Yourself is hardly a humble effort – from anyone else you’d probably be hearing warning bells as you pick up the record; the cover’s austere poem/manifesto includes the line ‘If the world would shut up/even for a while/perhaps/we would start hearing.’ With anyone else this early in their career, you’d laugh right back to wherever you bought it from with receipt in hand – but Savages own a gravitas, a brooding confidence and effortless cool, that no matter how cynical or wary of pretentiousness you are, will be suck you in. It’s not often a band will hold you hostage with cover art, a list of demands, but you’d be a damned fool not to pay the ransom to Savages.