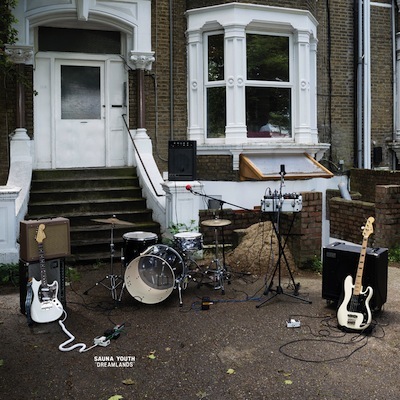 Filling the entire Side A of your first full-length release with a 10-minute spoken word track, read over a fast-paced garage jam, is a bold move in most people’s books. For Sauna Youth, it’s a logical progression.

The London-based quartet was formed by two ex-members of the melodic hardcore band The Steal in 2009, but has since undergone both line-up and musical changes. Their first demo tape was a fantastically raw collection of cut-and-paste garage rock played at punk speed, and its last track was a recording of a short story by Cold Pumas’ Patrick Fisher – the co-author of ‘Town Called Distraction’, which opens Dreamlands, Sauna Youth’s debut LP.

This is a neat indicator of how the band has, at the same time, evolved and stayed true to its original approach. Dreamlands sounds cleaner, sharper, and more melodic than the artfully put together tapes and 7”s the band has released prior to this. These recordings were often cobbled together via email, and featured drum tracks taken from band rehearsals, ambient sounds and samples. The results were occasionally jarring, but always interesting and often just really fucking fun to rock out to.

Dreamlands benefits from the personnel changes as well as the shift from a shambolic to a more metronomic sound. Singer Richard Phoenix has also taken over drum duties, and his playing is crisp, economical and on-point. A good example is the punchy ‘Snapback’, which is propelled forward by joyous major chords, a totally hummable chorus and melodic backing vocals courtesy of the band’s new(ish) keyboarder, Jen Calleja.

Another constant in Sauna Youth’s music (along with their use of short fiction) is Lindsay Corstorphine’s guitar work, which incorporates the looseness of early ’80s hardcore as well as the more considered aspects of groups like Sonic Youth. Case in point: the riff to single ‘PSI Girls’; a drilling, reverb-heavy monster that only consists of two chords but sounds like the Hulk repeatedly crushing a shard of metal in his sweaty palm.

Out of all the songs on Side B, ‘Planned Designs’ is probably the best: an upbeat, propulsive slab of dual-vocal-lo-fi punk in the vein of Times New Viking or early No Age. ‘Viscount Discount’, however, as the most generic and unmemorable track here, is an unfortunate choice for an album closer.

Some scene heads have detected a Retromania kind of vibe in the band’s aesthetic, but there is a sense of purpose and progress present in their music that can be appreciated by anyone with an interest in either old school punk rock, poetry, social and artistic commentary, or any combination of those things.

Apart from meditations on the minutiae of the mundane (the aforementioned ‘Town Called Distractions’), Dreamlands deals with social disconnect, communication breakdowns and boredom, concepts that play a big part in the band’s worldview. That’s right, we said worldview – because while Sauna Youth have toned down the wild-eyedness of their early days, they still think and act like a punk band, and they take their art seriously. As should you.