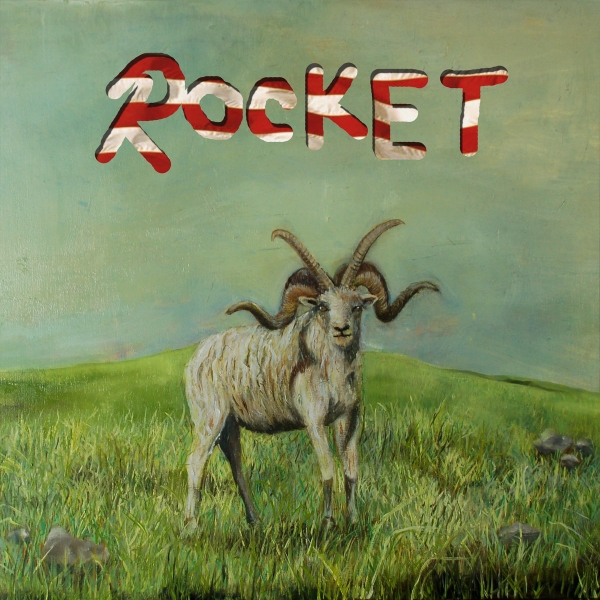 Rocket is another ode to youth: a perfect portrait of the incoherent, contemporary experience that says all we can do is fall in love, burn out, and feel alive.

If you haven’t yet heard of Alex Giannascoli - now known as (Sandy) Alex G - you should. Deemed as a musical genius by Toro Y Moi’s Chaz Bundick, and having collaborated on Blonde (2016) with the almighty Frank Ocean, this Philadelphia-grown multi-instrumentalist started out as a bedroom singer-songwriter, filled with millennial anxieties akin to Homeshake and Girlpool. His releases have a seething sense of anxiety and insecurity, in a way that makes us feel strangely comforted.

(Sandy) Alex G creates the most beautiful, Jackson Pollock-esque portraits of the contemporary experience in a way that’s disquieting, but also intimate and vulnerable. The naturalistic goat portrait adorned on the front of the album was painted by Giannascoli’s own sister and Rocket features collaborations from his own friends. His previous releases have revelled in their dark and raw nature, but with Rocket, we also get to see perhaps a more hopeful and carefree side to (Sandy) Alex G; especially with tracks "Bobby," "Proud," and "Alina."

Starting out as a bedroom artist in the gritty DIY scene of Philadelphia, playing house shows for university students at Drexel and Temple, (Sandy) Alex G soon became an international phenomenon when his releases on Bandcamp garnered the attention of Vice, Vogue, The Fader, Spin, and more. Adhering to his humble nature, the new album was homespun in Philadelphia among friends and family amidst a hectic few years of touring, while Jacob Portrait (Unknown Mortal Orchestra, Bass Drum Of Death) mixed in the finishing touches.

Rocket has a strong folksy atmosphere; utilizing a clattering banjo on the opening track “Poison Root” and “Bobby,” reminding us how truly versatile (Sandy) Alex G is. You’re brought even further out of your comfort zone in the middle of the album when introduced to the discordant track “Brick,” reminiscent of Danny Boyle’s heroin-filled, sepia-toned scenes in Trainspotting, as well as the equally frantic and distorted tracks “Horse” and “Witch,” enveloping the listener in Giannascoli’s unexpected danse macabre. Rocket is more heavily textural and gritty than Giannascoli’s previous releases, featuring more collaborations from his touring band members Samuel Acchione and John Heywood, as well as Emily Yacina, who sings on “Bobby” and “Alina.” This motley album even has remnants of R&B with its use of autotune on the track "Sportstar," repeating the phrase, "Sportstar / in the back of my car." The dysphoric track almost feels like a backhanded wisecrack at hip hop.

The album jumps between musical contexts from track to track, luring us into different musical genres: from country pop to dreamy folk to more beat-driven tracks. Rocket weaves a patchwork of complex emotions experienced by (Sandy) Alex G and his friends. The album is reaffirming and disheartening at the same time: in “Proud,” (Sandy) Alex G sings, “I’m so proud of you / And everything that you do / Doesn’t matter what they say,” but by the end of the track, he leaves us with the unsettling reality that “I don’t wanna be the one to leave my baby out with no bottle to drink / If I fuck up.” At first listen, Rocket maintains Giannascoli’s strong presence that we’ve seen on previous albums, however, the album deserves an astute ear in order to unearth the full complexity of emotions of all the collaborators involved.

In a Vice documentary, (Sandy) Alex G discussed how his music was a way for him to express himself and communicate with others, without falling prey to his shyness and feelings of social anxiety. For (Sandy) Alex G, making music “[is] a really easy way to be [himself]...” In Rocket, we experience an even more maturely constructed sense of communication between himself and his avid listeners. Rocket, like the name suggests, encourages you to be young and alive: to “have fun, fall in love, develop obsessions, get into trouble, and burn out.”