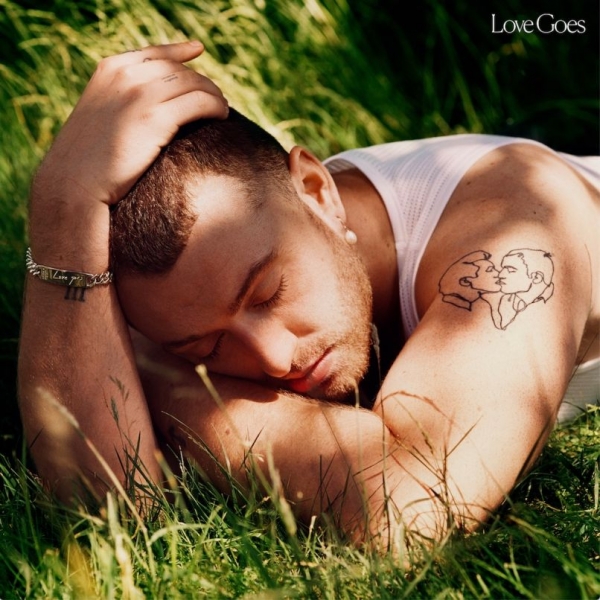 Opening the album in an anticlimactic fashion, “Young” is a vocal-only track showcasing Smith’s vocal range and vibrato over electronically echoed harmonies. Despite the lack of energy in the early moments, the tranquillity does allow for a seamless transition to the recent single “Diamonds”, with the slow building track offering the first taste of the upbeat dance energy Smith has come to showcase.

Love Goes feels like the first album Smith has had fun with. Although still featuring their primary song topics of love, lost and found, the upbeat and relaxed nature makes it feel like a breath of fresh air compared to their heavier and more melancholy earlier albums. Its carefree nature can be felt strongly in the track “So Serious” - over a simple but catchy backing track Smith sings in encouragement to “put your hands in the air if you sometimes ever get sad like me.” Further amplified with the chorus' hook ringing out: “god I don’t know why / I get so serious sometimes.”

The midpoint of “Dance (Till You Love Someone Else)” is a defininte highlight. Soaked in glittery dance pop, Smith sings about searching for new love on the dance floor whilst trying to forget an ex. Once again preaching their new mantra of self-love and carefree living and loving with the lyrics - “hold my breath and open my eyes, got to drag you out my mind / still not over it / someone get me over it” sung over more punchy dance beats.

Love Goes does however adopt a slower pace for its second half. Ballads such as “For The Lover That I Lost” and “Forgive Myself" brings about a refreshing change of pace is, but it is disappointing to hear Smith sing once more of his usual heartbreak and sadness. To put a narrative to it, the first half seems as if Smith has recovered from a breakup - preaching self-love and happiness - before backtracking to his pain and vulnerability in the wake of a breakup in the second half which ultimately feels counterintuitive.

The most forgettable moment comes in the penultimate, titular track “Love Goes” featuring British singer and produer Labrinth. Whilst their voices complement each other brilliantly, the bigger picture does end up feeling bland.

Closing with “Kids Again”, a slower track discussing growing up, and Smith’s life “living out of suitcases and hotels”, the track bridges the gap nicely between the album’s first half of upbeat dance tracks and the slower second half of the album. Whilst Love Goes could have been an album containing only Smith’s newer dance sound, the album does offer something for all Sam Smith fans, to mixed results.