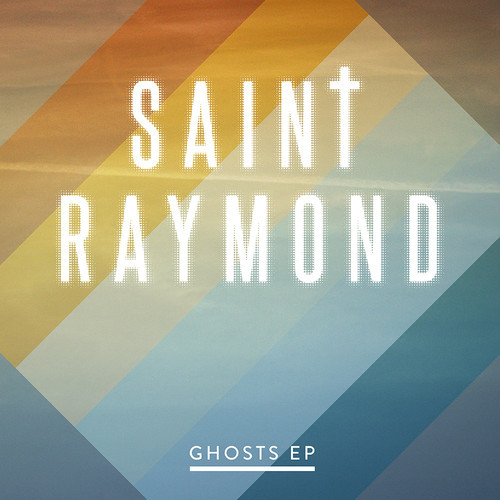 Ghosts, the new EP from Nottingham singer-songwriter Saint Raymond (aka Callum Burrows) is a flexible quarter hours of contemporary pop music, a short album that gains in melody what it loses in character or grit. “Everything She Wants” begins the EP with an elastic three minutes of glimmering indie rock, locating a casually perfect hook in a simple missive like “If I could give her, give her, give her everything she wants,” wrapping the melody in glass-clear guitars and cycling synthesizers. The song is state-of-the-art, both in i’s clearly gorgeous sound and in the ways it reflects the au courant aesthetics of circa-2014 indie pop music, which have tended toward exactly the kind of effervescent, quick-pulsed dispatches that Saint Raymond trades in.

The sunny Caribbean lilt of “Brighter Days” is either welcomely airy or hopelessly cheesy, depending on your perspective, and like much of what is on offer on Ghosts, the song constantly teeters between those two poles, between the effortlessly likable and the wholly cloying. Indeed, “Brighter Days” is exemplary of the EP’s total lack of friction, a surface polished to shine under sunbeams. It’s music for use, provided that use is driving with windows down. “Brighter Days” does feature an undeniable chorus – you get the sense that Burrows quite cannily puts hooks first, largely deploying verses as empty vessels to soundtrack television dramas and cinema trailers – all widescreen harmonies and excitable, Paul Simon-esque melody. This all becomes quite literal when the song drops into an acapella valley wherein all we hear is the song’s bright, extroverted chorus, as if in acknowledgement of Burrows’ chief talent, his ear for what elementally catchy tunefulness.

Ghosts also includes a cover of The Jam’s “English Rose,” recorded live at the BBC. Burrows’ rendition does include some interesting filigree – a gloaming air of translucent keyboards hangs in the atmosphere around trickling acoustic guitar, seemingly a replacement for the coastal sounds of the original – but Saint Raymond has elected for the unenviable challenge of covering a song that is all but defined by a specific atmosphere (those washing sonics) and a specific voice, the eroding tenor of Paul Weller. Like many high-risk, low-reward re-imaginings, Burrows’ take is largely neutral, telling us little about “English Rose” and even less about Saint Raymond. In essence, the cover stops Ghosts in its tracks.

The EP’s title song is also its most obvious highlight, the track’s bright, athletic jangle perhaps boosted by the inertia of the preceding number, its footloose rhythm arriving like kinetic relief. Set to an excitable bit of fleet disco strut and radiant, precise guitars, the song resembles the kind of keen, amiable guitar music we’ve come to expect from Tokyo Police Club or Bloc Party at their most optimistic, bands that have managed to bend electronic and ambient influences to the shape of Type-A pop. There’s still not quite as much character to Saint Raymond’s version of this aesthetic, less of Tokyo Police Club’s ace storytelling and charming self-deprecation, for instance. Indeed, finding ways to own the trappings of guitar-first pop music – no easy feat – will have to be Burrows’ next task, considering the ways in which he’s mastered the steps, if not the motion. The song’s outro, built around the kind of “woah-oh” hook that has long overstayed its welcome as the type of easy pop signifier that shows up in credit card ads, typifies the point. It would appear that this variety of easily-liked rock music comes so easily to Saint Raymond, to the point that we’d all benefit from the obviously gifted songwriter trying something a little more “difficult”, in every sense of the word.