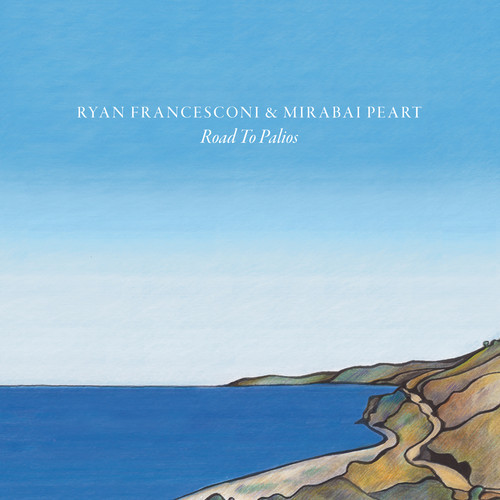 Inspired by a journey to the Greek island of Lesvos in 2010, Road to Palios is a collection of acoustic duets beautifully played by Ryan Francesconi and Mirabai Peart that both delights and frustrates. That the two are musicians of considerable ability there is no doubting, and – at times – the lyrical interplay is not only eminently engaging but quite enchanting. However, the polished elegance makes one long for more rough magic, more jagged-stringed calls and responses of the type that constitute some of the most successful episodes here. When languidness gives way to brittleness, Road to Palios thrills. Too often, though, the music meanders like the ancient Greek (now Turkish) river from which the verb derives.The mutual respect so clearly in evidence tends to drift into a politeness that provokes a feeling of a wasted opportunity for two such talented players.

Rural Greek terrain is far from even, and the history of the Hellenic world often fraught. Francesconi’s musical passion is for Balkan folk tunes and there are some delightful echoes of these here and there, but too often the gloriously spiky rhythms that characterise so much of traditional Greek, Bulgarian and Turkish music are smoothed away in their incorporation into an air conditioned soundscape. ‘Parallel Flights’, the first track here, has an occasional plucked string that hints at turbulence but too much is refined to the extent of conveying a trouble-free glide involving little contact with any chthonic features of the Aegean region.

In ‘For Christos’, Peart’s violin leads with energetic rhythms that compel attention, but subsequent placid tones become just too insistent in their regularity, and there’s a sense of missed opportunities through a lack of daring. Francesconi’s exquisite guitar work is just that: too demure for territory that, since Classical times, has witnessed radical expression in various forms: literary, political, philosophical among others. When the barks of Peart’s violin strings are truly felt, the effect is exhilarating, but they all too soon subside into a rather lush soundtrack .

‘Road to Palios’ has bursts of driven clutches of sounds that then subside and then circle promisingly as if on the verge of engaging with a challenging idea, but become fearful of so doing lest they cause offence – sentiments hardly characteristic of contemporary Greeks of the islands or the mainland caught up in the current all-too-real crisis. Towards the end, the interplay really sparks and is (temporarily) thrilling, but it’s all too brief, and we’re into ‘Far From Shore’ with the musicians for the most part adrift from any gritty contact, aside from an occasional convergence rather like graceful ships (cruise liners, perhaps) that pass in the Hellenic night. When there is a vigorous meeting up, once again the effect is glorious, somewhat like that created by the splintered folk-inspired rhythms in Bartok’s Quartets, as achieved in ‘Pontic’, the most successful track on this album, when one always senses that the calm after the storm is only a brief interlude before the violent elemental clash resumes.

Gentle seascapes and pleasant rural imagery just do not do justice to the musicianship of these two artists. Francesconi has worked with Joanna Newsom and was the principal arranger on Have One On Me. Peart was part of the touring band for this. At their best on Road to Palios the pair offer rugged dialogue that remains in the mind far longer than the excess of placidity. After all, Lesvos was the birthplace of Sappho whose celebrations of sometimes conflicting passions survive in fragments illustrating a wondrous balance of emotional energy and expressive calm. When the balance is successfully achieved on this disc, the creative thrust is undeniably convincing. Too often, though, a mannered reticence predominates and the clashing rocks are worn away by a gentle tide.

Listen to The Road to Palios