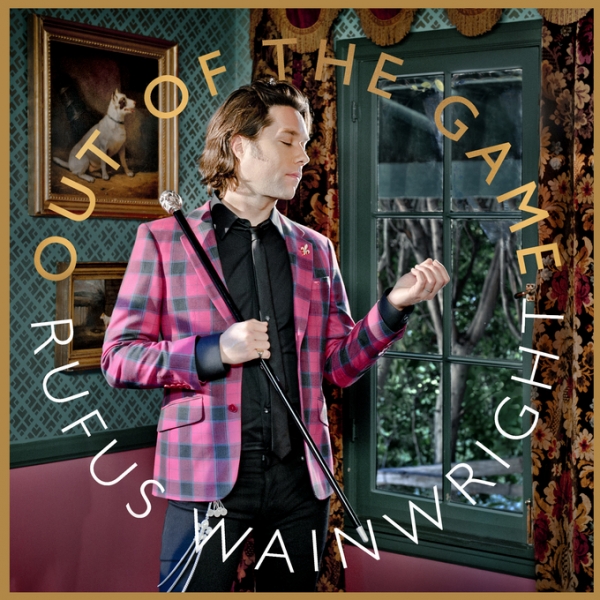 Out of the Game might be the most honestly-titled album to come out in 2012. For a record described as “danceable and poppy” by the man himself, it almost flaunts its lack of interaction with the mainstream music scene in the way only Rufus Wainwright could, or would. Hell, the presence of Mark Ronson on production duties immediately shows just how out of touch Wainwright’s pop culture reference points are. Contrary to all expectations, however, the pairing works shockingly well; there’s little of the unpredictable fire and brimstone that dragged down the worst of Want but made Release the Stars such a thrill, and even less of the soulboy brass arrangements that define Ronson’s sound. If there are trumpets, they are for fanfares, and fanfares only. Add in the extra spring in Rufus’s step, courtesy of the arrival of his daughter Viva, who inspires many of the songs, and the end result is a record far more geared towards Radio 2 than Radio 1.

The title track, unsurprisingly, makes Wainwright’s individual streak clear, proclaiming within ten seconds “I’m looking for something that can’t be found on the main drag”. There are lady backing singers, subdued drums and some tastefully nifty George Harrison-style slide guitar – all of the hallmarks of a lead single that screams for adult contemporary playlist glory; and yet, it’s all sublime, with Rufus’s immaculate pipes making sure the song stays just left of centre. In fact, a Beatles influence worms its way across much of the record; the New Orleans piano waltz of ‘Rashida’ takes ‘Oh Darlin’ to Broadway, while ‘Jericho’ flaunts some more Harrisonesque lead lines, a heavenly falsetto and a string arrangements flown straight in from ‘The Long and Winding Road’.

The AOR approach doesn’t always work; not even Nels Cline’s fluttering guitars can save the porno groove of ‘Barbara’ from being an early slump, and while ‘Bitter Tears’ might be the only thing here that matches how Rufus hears the record in his head, its knowingly vintage-sounding keyboards and cheap drum machines leave it just a few feathers short of a retro haircut. Meanwhile, the increasingly mid-tempo second half of the album sags in a way that you’d expect from a man of Rufus Wainwright’s age… just not from Rufus himself. Fortunately, Out of the Game saves itself with the glorious slow-build of its closing track, ‘Candles’; with its wistful refrain of “The churches have run out of candles”, it’s a weepy Gallic torch song (no pun intended) that works as the apogee of the album’s subtle approach, allowing all the whistles and bells (and, err… bagpipes) to simmer at just the right level without becoming overbearing. An odd thought, given the song’s resemblance to the title track of Leonard Cohen and Phil Spector’s bloated cocaine masterpiece Death of a Ladies’ Man, but then, Rufus Wainwright is a contradictory man.

Almost everything here is shorn of the pomp you would instinctively associate with Rufus Wainwright, and it’s a sure bet that many will miss the flamboyance which, while not completely absent, merely reveals itself in different ways. The beautiful nocturne of ‘Montauk’ – the best thing on the album – is a plea to an older Viva for an understanding of her atypical family set-up. It’s arguably the most mainstream account of the norms of gay marriage and parenthood ever released, explaining to Viva that she may “see your dad trying to be funny, and see your other dad seeing through me”, before slyly adding “ hope that you will protect your dad”. It’s clever without being smarmy, heartfelt without being sappy, and ranks as possibly the most personal lyric Wainwright has ever written.

So the no-whistles-and-bells approach suits Rufus Wainwright pretty well after all, on this album, a close cousin of Poses - a record of the type many people have been wanting him to make of the last decade – that, while not quite reaching that album’s heights, certainly matches it in consistency. For an artist so unpredictable and restless, such normalcy may just be one of the biggest surprises that he could have delivered. Chances are, it’ll be back to business as (un)usual fairly soon though – check out that album cover: if that’s how being out of the game has you looking, you can’t blame a man for wanting to stay there.