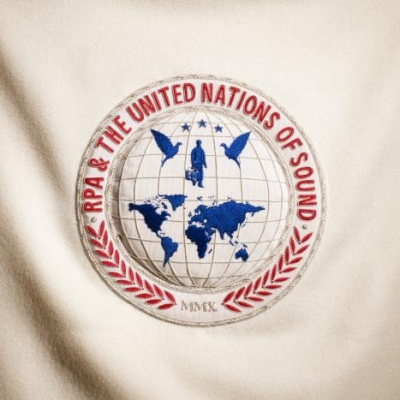 I have given Richard Ashcroft more chances to redeem himself than I care to admit, or that he even rightfully deserves, casually forgetting about one shoddy solo record after another simply because this is the man who gave us ‘This Is Music’ after all. His rousing and anthemic back catalog is enough to mask any current missteps, simply because if you get tired (or embarrassed) of Fourth, you can always go back and listen to A Storm In Heaven to be reminded of the man’s brilliance. But that perennial gesture of exoneration has officially come to an end with United Nations Of Sound,  Ashcroft’s latest feeble offering, this time under the guise of RPA &  the United Nations Of Sound. It’s a bloated album filled with cloying religious references, overdone guitar solos, cliched beats, and *shudder* Ashcroft attempting to rap. If all of that doesn’t make you immediately run to ‘Slide Away’ to cleanse your sonic palate, than maybe Ashcroft has found his audience in you. If you’re like me, though, you are left feeling mortified for an artist who has clearly lost his way and is tarnishing his legacy with each hollow step backward.

‘Are You Ready’ actually starts strongly, with the emphatically uplifting strings echoing the Verve’s greatest (or most memorable) achievement, ‘Bittersweet Symphony.’ But Ashcroft slowly unravels the spirit of the track through trite lyrics and an overly repetitive chorus that, even if you were “ready” at the start of the song, by the time it finishes you no longer care about whatever half-baked movement Richard has in mind. The album was produced by No ID, the self-proclaimed “Godfather of Chicago hip-hop,” and while he places Ashcroft’s vocals amidst an interesting and often unfamiliar sonic environment, he clearly has no sense of brevity, as each of these songs drag on for two or three minutes too long. And he clearly hasn’t provided Ashcroft with his best material either, as most of these beats sound dated and rehashed. ‘Born Again’ also suffers from a monotonous chorus and Ashcroft’s preachy lyrics, while ‘America’ is a cringeworthy attempt by Richard to inflect an urban, streetwise sound to his vocals. And count how many times “London-town” is mentioned throughout this song (and the album for that matter); it’s as if Ashcroft is desperately trying to rally a fanbase in the capital that has all but given up on him.

‘This Thing Called Life,’ in addition to repeatedly commanding us “let’s do this thing called life,” also calls out to the listeners “out there in the matrix tonight.” Does he even know what year it is? His vernacular and cultural references are painfully out of date, and just sound awkward coming from a man his age. ‘Beatitudes’ could really be a career low point for Ashcroft, simply because of how earnest the song sounds, and how flat it ultimately falls. Richard’s downtown vocals are clumsy at best (and shameful at worst), and when combined with the sanctimonious subject matter of the track itself and the antiquated beats and rhythms, it all amounts to a colossal musical mistake that should have never seen the light of day.

Ashcroft switches his act from seasoned tough-guy to sensitive loverman on the next three tracks, all to similarly disastrous effect; with ‘Good Lovin,’ ‘How Deep Is Your Man’ and ‘She Brings Me The Music’ all sounding like approximations of styles and techniques that continually elude Ashcroft due to his tired and uninspired efforts. The bluesy force of ‘How Deep Is Your Man’ rings false and empty, and manages to discredit the fine blues history of Chicago while also signaling the harbinger of the end to Ashcroft’s career. The incredulous thing is that this truly awful song is better than the ones that come both immediately before and after it, with the saccharine desperation of ‘She Brings Me The Music’ being the worst of the lot,  clearly letting the listener know that this isn’t ‘Lucky Man’ by a long shot. And that is at the heart of my disdain for this album; knowing the first-rate songs that Ashcroft has been part of in the past only makes me more frustrated and perplexed by him settling to release this rubbish, convinced somehow that it’s good, or at least good enough,  when it’s so clearly not.

Unfortunately the record only gets worse from there, with the ‘Sweet Jane’ ripoff of ‘Royal Highness’ leading painfully into the overly-simple sermonizing of ‘Glory.’ You can only hope that the relative tranquility described in the closing numbers ‘Life Can Be So Beautiful’ and ‘Let My Soul Rest’ is hinting that Ashcroft has found a reason to take a break from music and be content with how his career has played out. Because if he keeps releasing music as dreadful as this,  people won’t even be able to listen to his older material without bringing up his inferior current output, with even his classic songs being clouded by these lousy numbers. And that would truly be a shame,  for Ashcroft has indeed given voice to some of the most indelible anthems of modern British music, and we shouldn’t forget that. But, by consistently putting out shoddy albums like United Nations Of Sound, Ashcroft only makes it more and more difficult to forgive him for these musical transgressions.