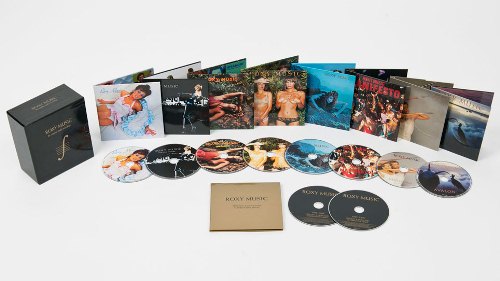 “Make me a deal and make it straight…”

Roxy Music are a band who always seemed to inspire in spirit rather than in sound; as any ’70s music documentary worth its salt will tell you, Roxy were punk before punk was punk. Sure, Johnny Lydon loved his Van Der Graaf Generator, but for everyone else, Bryan Ferry and co seemed to be the pretentious wankers it was okay to like, with visuals that marked them as perfect for the video age that was just around the corner. Yet, after punk, Roxy Music have never seemed particularly cool: as someone who came into existence a few years after the band bowed out, they were more like a tacky relic from my dad’s record collection. Of course, they’d pop up on my cultural radar here and there – via Bill Murray’s karaoke turn in Lost in Translation, of course, not to mention frequent plays on Top of the Pops 2 and the seemingly relentless stream of Roxy’s music in Velvet Goldmine – yet, to a younger version of myself, the music that spun out from their ranks (especially from the cavernous mind of one Brian Eno) always seemed much more worthwhile.

A cursory blast of Roxy Music’s 1972 self-titled debut is pretty much proof enough that the younger me was a fucking idiot. ‘Re-make/Re-model’ remains one of the all-time great side-one-track-ones – a relentless garage barrage which seems to make no musical sense – right down to the group chant of Ferry’s car’s licence plate number – and manages to quote The Beatles, Stockhausen and Chuck Berry whilst sounding like nothing that ever came before. It also introduces the band wonderfully: the rock-and-roller guitarist, the hod-carrying powerhouse of a drummer, the cruise-ship sax player, the crazed lounge singer and… um… the Eno. Nothing else on Roxy Music kicks quite as hard its opening track, but as a piece, it’s forty minutes of truly progressive rock – the sound of five guys trying desperately to escape the ’60s. ‘If There Is Something’ in particular manages to cram a career’s worth of ideas into six minutes, with Ferry’s heartfelt declarations of love rapidly veering from extreme (“I will climb mountaaaaains!”) to bizarre (“…growing po-tay-toes by the scoooooore!”). Sure, the album sounds a little too fresh out of art school at times, especially during side two, but they never sounded this freewheeling again.

Nevertheless, with bolder production and a more assured set of performances, the best moments of the band’s second effort, For Your Pleasure, sound beamed in from another planet: ‘In Every Dream Home a Heartache’ is an alien transmission about the joys of sex with a blow-up, culminating in sustained spurts of guitar heroism from Manzanera; and the barely-controlled chaos of the evergreen ‘Editions of You’ entirely speaks for itself. But once again, the album is front-loaded, as its second half – with the kraut-gone-serialist saxophone shuffle of ‘The B0gus Man’ and the dark, slow drift of the title track’s self-consciously Reichian samplings – once again lays on the experimentalism somewhat thick. Still, Pleasure is a much more satisfying album as a whole than Roxy’s debut, and while it’s unlikely that, even Bryan Ferry ever knew how to ‘Do the Strand’, I’ll be damned if an entire generation didn’t have fun trying to.

These first two albums attest to the tug of war between a Bryan and a Brian, pushing and pulling between classicist musings and sonic experimentalism. So while Eno’s departure – infamously brought on by his mind wandering towards the fate of his laundry while onstage – was sudden, it wasn’t unexpected. Therefore, it comes as no surprise that Stranded – released mere months after For Your Pleasure – simply follows the course set out by its predecessors. It’s just that every member of the band now has to work that little bit harder to plug the gap: ‘Just Like You’, based on Ferry’s most sumptuous piano work to date, is one of the band’s very finest ballads, and while propulsive lead single ‘Street Life’ is still doused with unplaceable noises, the singing is stranger, Manzanera rocks harder and Paul Thompson’s drums shine brighter than ever with his sassy theme-from-Shaft hi-hat hits. There are still a few strange detours which suggest a band grasping for things just out of reach – ‘Psalm’ spends a quarter of the album’s running time warping the entire gospel genre, Welsh male voice choir and all – but by the time the seven crazed minutes of ‘Mother of Pearl’ roll around, suddenly crashing from a blitzkrieg into graceful fallout, and blessed with perfect performances from nigh on every member of the band (and Ferry’s densest lyrics to boot), you get the feeling the best might just be around the corner.

Building on the style and momentum of its predecessor, Country Life refines matters even further. ‘The Thrill of It All’ – a flashy, string-laden stomp of an opener – follows a relentless chug that sounds like it could go on forever, and pre-empts Bowie’s Station to Station by a good couple of years. Elsewhere, there are worthy stabs at freaky Americana, amped-up Roxy rock’n’roll and Weill-ish Teutonic balladry; yet, for all its genre-hopping, Country Life is the first Roxy album that really finds the band in control of their sound. Meanwhile, somewhere in a bedroom in Tamworth, a young boy named Cope was surely listening to ‘Out of the Blue’ and taking notes. Siren, the home stretch of three relentless years of creativity (five albums, plus two by Ferry on his own) proves that there was no shortage of ideas floating around Ferry’s head. ’Love Is the Drug’ is Roxy’s cheekiest peak – witness the way Ferry twists his voice for the song’s punchline (“I say go? She say yes! Dim the lights – y’c’nguessthuuuuuu-rest”) – and its wordless chorus is a prime example of the way the band were masters of pop subversion. The rest of the album follows similar melodic meanderings, putting it more in line with Eno’s solo work than any of Roxy’s music; the motorik beat of ‘Both Ends Burning’ makes for one of the band’s best singles, whilst broken shards of gypsy violin crop up unexpectedly on ‘She Sells’. For all of the band’s restless experimentation, Siren is the hardest-rocking of the band’s early work, and as such, it might just be the best of the bunch.

After a four-year gap, Manifesto thrust Roxy Music back in a cleaner, leaner formation yet, while the line-up was once again reconfigured, the album doesn’t lose as much of the band’s original charm as you would expect; in fact, it might just be the dark horse of the band’s catalogue. With its pseudo-punk sound, the band could have been sitting on the strutting ‘Trash’ since 1977, while the disembodied funk of ‘Stronger Through the Years’ pre-empts their superlative final album. Yet, heralded by the drab MOR funk of ‘My Little Girl’, side two starts to get somewhat syrupy; by 1980′s Flesh + Blood - the true nadir of their output – the band sound like they’re simply drowning in molasses. Where once Roxy Music were a band that strove to find order in chaos, by 1980 - reduced to a session-musician-bolstered trio – they simply erased any trace of chaos whatsoever. Take the album’s two godawful cover versions: Wilson Pickett’s ‘In the Midnight Hour’ is played without any semblance of soul whatsoever – all major chords and deeply un-blue notes – while the only exploratory thing about the Roxy rendition of ‘Eight Miles High’ will be the listener’s desperate search for the skip button. ‘Same Old Scene’ manages to capture some of what makes Roxy great, but as a whole, the album sounds too damn nice to be anything but music for dinner parties. And bad dinner parties at that.

And yet somehow, from pretty much the same components, comes the band’s secret masterpiece – Avalon. Slinky synths and atmospheric production abound, but there’s a sense of mystery here that was sadly absent from the rest of the band’s post-hiatus work. Its enigmatic gloss has found unlikely fans in Dan Bejar – who cited it as a major influence on last year’s masterful Destroyer album Kaputt – and Robyn Hitchcock, who often covers its songs in concert, and even cribbed the record’s colour scheme for the sleeves of his more reflective records. ‘The Main Thing’ rides on a drivingly sinister funk groove, whilst interludes ‘India’ and ‘Tara’ both sound like they come from what one might call Another Green World. Sure, it’s easy to deride the record as overproduced MOR slop (and, to be fair, ‘While My Heart Is Still Beating’ seems to have written ‘Careless Whisper’ a few years early), but for all its saxes and sultry lady backing vocals, if the title track is middle of the road, you’d hardly dream of veering anywhere else. Hell, in the vocal-less final minutes of lead single ‘More Than This’, you can all but hear His Ferryness simply looking upon his work and smiling – and you can’t exactly blame him.

There’s no risk of Roxy Music ever being confined to the dustbin of history, but packages like this – while exhaustive – may not appeal to many people outside of those who aren’t already fans. The numerous radio edits and remixes which are sprawled across the two discs of bonus tracks make them irritating listening for those who only want to hear the one-off singles like ‘Virginia Plain’ and ‘Jealous Guy’ (criminally, their only number one single) all in one place. Most carelessly of all, you get two indistinguishable mixes of ‘Pyjamarama’ shoved together one after the other, creating a state of Pyjamarama-rama, if you will. But all in all, while fitting in with the band’s ethos of indulgence and luxury, this box set will hardly appeal to the merely-curious. Nor, more importantly, will it be likely to entice a younger generation of music fans, to whom Roxy Music may still have something to say if packaged correctly. With individual remasters of each album apparently coming soon as well, you almost wonder what the point is. Nevertheless, as a testament to the brilliance of Roxy Music all in one handy place, The Complete Studio Recordings is a wonderful and necessary artifact and, to cop one last lyric, that’s the main thing.