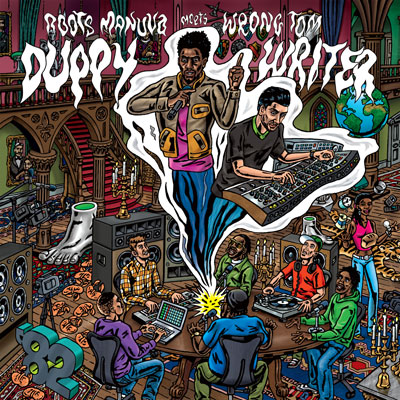 What do Katie Price, Hillary Clinton, and John F. Kennedy have in common? Well, they’ve all had books written by people other than themselves. Ghostwriting’s been going on for centuries.  Even a musical legend like Mozart ghostwrote music for his rich patrons. That’s not to compare Wrongtom to Mozart, of course.

After reworking parts of Roots Manuva’s Slime and Reason some two years ago, Wrongtom has been brought in by Big Dada to expand on that disc and dip into Rodney Smith’s full discography. The album’s content is reflected by its wonderful artwork which is handcrafted by Tony McDermott: the designer behind many of the illustrations on London-based reggae label, Greensleeves.

The album is filled with (admittedly electronic) dub reggae vibes of the highest order. You may think this ground was covered on Dub Come Save Me, but – and with no disrespect to Lord Gosh – said record ultimately suffered from being something of a scattershot remix album, whereas Duppy Writer has a distinct focus. For example, dutty digital outings such as ‘I’m a New Man (new version)’ have no place on Duppy Writer (‘Duppy’ meaning ‘Ghost’ in patois).

Ultimately, Wrongtom has attempted to make the album sound like each track came from a different era of reggae, and, to an extent, he largely succeeds, though the casual listener may not care for musical minutia. However, for those that prefer to virtually x-ray a record, here’s some information exclusively from Mr Wrongtom himself:

“‘Motion 82′ is a nod to those early ’80s dancehall 12″s on Greensleeves like ‘Wah Do Dem’ and ‘Diseases’ (produced by Henry Junjo Lawes). ‘Worl’ A Mine’s’ on a Treasure Isle Duke Reed tip. Obviously all the digital stuff owes a lot to Prince Jammy with ‘Buff Nuff’ and ‘Chin Up’ heading into early ’90s dancehall territories like Patrick Roberts’ Shocking Vibes stuff or Mafia & Fluxy. I was going for a bit of a british reggae thing with ‘Dutty Rut’, (Dennis Bovell and his ilk)”.

With this microscopic dedication to influence, it’s going to be hard for dub lovers to dislike Duppy Writer. With the grime wiped clean from some of those original productions, Rodney’s lyrics are given space to cut through, so they no longer clash with their occasional hip-hop surroundings. If anything, the Caribbean emphasis Rodney brings to his lyrics (and music) are given a more appropriate environment to inhabit. Not only that, but (particularly in the case of ‘Son of Bodda’) Rodney’s rolling delivery is even more appealing under Wrongtom’s stuttering, staccato basslines.

Complaints about what tracks could have, or should have, been reworked may be unavoidable from hardened Roots Manuva fans, but the real question is: where’s the new Roots Manuva material? Duppy Writer temporarily fills a gap and is an entirely rewarding record on its own terms, so while Rodney seems to be throwing himself around the live circuit, let’s just hope this album doesn’t represent a point where one of the UK’s most visible MCs has run out of things to say.