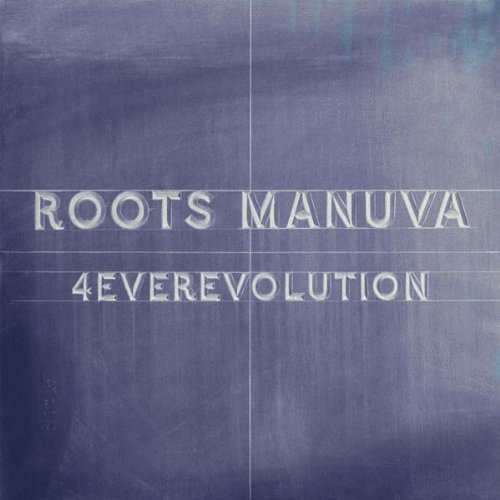 With the recent success of Dels, Ghostpoet and others, UK hip hop, so often seen as the malformed younger sibling of the titanic scene across the pond, has been enjoying its healthiest patch in years. A fine time, then, for British rap’s most illustrious ambassador, its brigadier general, to release one his finest sets to date. After the grim (and highly compelling) soul searching of 2005’s Awfully Deep, Roots Manuva rediscovered his funny bone and carnival spirit with its follow-up Slime & Reason in 2008, fuelled in part by a renewed connection with Jamaican dancehall and a fruitful partnership with producer Toddla T in Sheffield, a city he’s called home since 2006.

The Sheffield connection remains on 4everevolution, most notably on buoyant club banger ‘Watch Me Dance’, Roots’s most high profile collaboration with Toddla T to date. But at 17 tracks and with nary a stereotypical “comedy” skit in sight, there’s enough room on this generous album for the Banana Klan main man to stretch his legs like never before, flitting restlessly between styles with the kind of impeccable judgement and vocal dexterity that speaks both to his depth of experience and his unstudied, off-the-cuff brilliance.

Whether it’s the gentle Caribbean rhythms on relationship post-mortem ‘Wha’ Mek’ rubbing up against the tense, characteristically squelchy beats on ‘Takes Time’, or the stomping momentum of ‘The Throes Of It’ running into ‘Noddy’’s post-jazz elegance, 4everevolution is like a cannon firing in all directions at once. Incredibly, under Brigadier Smythe’s steady supervision the album’s formidable artillery manages to hit most of its targets. Although the tracks leap between elements of hip-hop, house, ragga and a host of other dance touchstones, each stylistic expedition is mounted with enough conviction and smarts to create its own microcosm.

One theme that ties this schizophrenic set together is the noticeable sharpening of the Roots Manuva style. Where most of his previous work exhibits a wonky, off-kilter vibe, Manuva’s wisdom seemingly floating at the listener through a cloud of skunk smoke, here the tracks are pulled into sharp focus. ‘Here We Go Again’ kicks off with a chest-rattling beat that sounds like some mad Decepticon transforming into a ghetto blaster as our hero launches into a cutting appraisal of a liberty-taking false friend. On strings-laden, Tory-baiting societal critique ‘Skid Valley’, Manuva’s intentions are positively laser-guided. “The cost of life’s so cheap round here/ But the cost of living ain’t cheap round here”, he laments, before going on to harangue politicians, chicken shops and soul-sapping British culture, all backed by an impressive full band setup including delicious, Questlove-style drum fills.

While by its own eclectic nature, 4everevolution doesn’t hang together quite as well as Run Come Save Me or Slime & Reason, each individual track creates its own atmosphere, with most able to stand tall among Roots Manuva’s finest tunes. It’s a veritable treasure chest of an album, an embarrassment of riches proving that one of the UK’s longest-serving rappers is also one of its most vital and relevant.