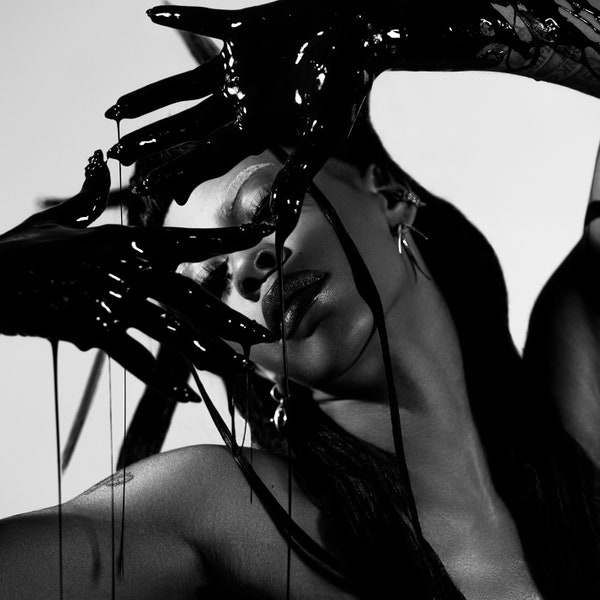 After releasing a series of EPs and mixtapes, including 2019’s Anger Management (with Kenny Beats), Rico Nasty shared her debut LP, 2020’s Nightmare Vacation, integrating her takes on horror-rap, glitch-pop, and competitive swagger.

Her new album, Las Ruinas, finds her embracing a more revealing and less satirical demeanor, while collaging hard-edged sonics, declarative lyrics, and vocal tones at once seductive and aptly intimidating.

“I am nonchalant to the bullshit / yes all of my thoughts are intrusive,” she snarls on the opening track, bolstered by barbwire beats and clangorous synths. “Black Punk” shows her embracing street theatrics, painting a vision of dissociative loneliness and Hollywood excess, equal parts Thelma Wright, hip-hop Gatsby, and Backxwash. While she still embraces the violent and industry-standard personae of her debut, her particular mix of disjointed beats and metallic accents yields a surreal gestalt that would be worth revisiting in the future.

“One on 5” features a more grounded Rico vowing loyalty to her “sisters” while adopting a variety of voices in a way that recalls Lil Simz or Megan Thee Stallion. While the track highlights Rico’s versatility, it also brings into stark view her occasional tendency to drift into roles that land as predictable. “Skullflower,” in contrast, shows Rico nailing a tongue-in-cheek cross between gangsterism (“Keep me a Nina”) and French couture (“Maison Margiela all over my blazer”). “Blow Me”, meanwhile, revels in capitalistic neurosis while issuing an unapologetic fuck-you to would-be parasites.

“Dance Scream” is the set’s BigPop moment, Rico’s voice washed in chorus, giving it a smoother timbre. “Focus on Me” similarly calls attention to Rico’s pop sensibility, the rapper playing diva a la Rina Sawayama or Beyonce post-4. “Into the Dark” is perhaps Rico’s most diaristic piece, the “tortured artist” alternating between remorseful compadre/lover (“I promise I’ll do better”) and vengeful frenemy (“Want me to be good, but I’m a bad bitch”). Her use of vocal layering, including delicate parts offset by disturbing screams, leaves a memorable impression.

Las Ruinas spotlights Rico navigating a broader emotional and stylistic range than she did on her debut, while also displaying finer attunement to the details of songcraft, production, and performance. And yet, one has the sense that Rico is still seeking to codify her brand, to claim a fertile balance between horror and pop, posture and vulnerability. That said, she’s dropped a few diamonds and a bagful of semi-precious gems along the way.