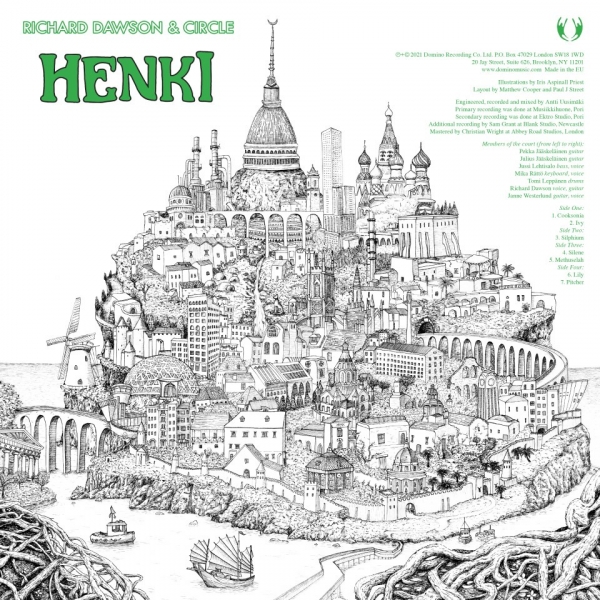 Never meet your heroes, so goes the old adage, and for those who’ve met idols musical or otherwise, there can certainly be truth to cliche.

But Richard Dawson, one of few British folk musicians who seems to actually love the isle’s oldest folk traditions, rather than writing rock songs with a banjo, offers a rebuttal to that claim on his seventh studio album. The album is a collaboration with Circle, an eclectic and experimental Finnish post-rock band who Dawson once claimed to be his favourite of all time. “It was like being a teenager and suddenly being asked to go onstage with Iron Maiden” he said, of the first time they invited him to perform with them. “That’s how important this band are to me”.

The two projects - the first a one-man show by a Geordie who uses his animated vocal style to sing songs set in 400CE and Amazon fulfilment centres, and the other a six-piece Finnish band with 32 albums to their name - seem like an unlikely match, but the fact that their styles compliment each other so well should be no surprise. Although the joy of Dawson is mostly lyrical, and Circle largely instrumental, both have a shared history of relentless creativity and reinvention. No Dawson song is alike, and his subject matter spans from murder to jogging. Circle meanwhile have dabbled in ambient, jazz, krautrock and metal across their three decades, and rise to the challenge of complimenting a singer this verbose on Henki.

Just as Dawson clearly relishes being able to record with Circle, so too does the album feel like a treat imparted to the listener in the lead up to Christmas. There’s so much to unpack here. It’s a sprawling work, the shortest song being six minutes, the longest being over twelve. Lyrically, Dawson is on fine form. Just like his 2017 album Peasant before it, where all of the stories were set tbetween 400-600CE, so too does Henki riff on a theme: flora and fauna. There’s a tune delivered from the point of view of an 32,000 year old seed frozen in the permafrost, and others from lesser known explorers and herbologists. If that sounds dry, then it isn’t. Dawson seems to have no concern for the thematic tropes of 90% of songs, meaning lyrics about vascular plant researcher Isobel Cookson on opener "Cooksonia" are delivered with the same energy that Ariana Grande sings about an ex. “I managed to study at the University of Melbourne!” Dawson hollers at the end of one of the songs verses.

As captivating as the stories of these songs are, Circle are by no means simple accompanists on this record. "Ivy", a psychedelic riff on various Greek myths, is adorned with the hammy backing vocals and propulsive guitars in the way of no Richard Dawson song before it. Closer "Pitcher" is a Krautrockian number which even features operatic vocals from the band’s lead singer Jussi Lehtisalo; he and Dawson lost in the eye of a storm which seems to cycle upwards until the song’s end. The best songs here showcase them both at the peak of their powers, such as on the epic "Siliphium", which tells the story of plant of the same name, upon which the Roman city of Cyrene built an empire, but also features an extended instrumental interlude, which sees Circle at their ambient, twitchy best. Don’t meet your heroes? Maybe. But make an album with them? Can’t go wrong.