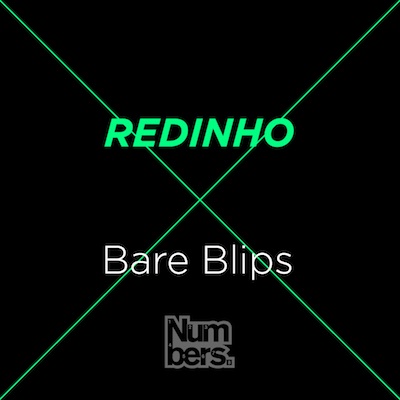 Imagine, if you will, the finest confectionary companies in the world joining forces with the singular vision of producing sweets so incredible that they would makes your shoes explode. The musical equivalent of this happened last year when three Scottish labels (Dress 2 Sweat, Stuffrecords and Wireblock) decided to join forces to form Numbers – who are not only the most exciting label in Scotland – but quite possibly the world.

Since their amalgamation they have released EP after EP of vital and envelope-pushing electronica. But it’s this release from Redinho that will cause many jaws to smash squarely against the floor – a flawless genre-busting eight tracks of digital exploration that have to be heard to be believed.

Setting out its stall with the earth-shaking bass wobble of ‘Boy Racer’ a nippy 1:30 of deftly fused coin-op samples and two-step mechanics, that leaves the listener unsure if they are to head to the dance-floor or grasp their joystick harder. Next, without warning, in drops the synth-paradise of ‘Lightning Strikes’ finding its feet with a more deliberate tempo, peppered with 8-bit arpeggio waves and clashing bursts of sound that dart from speaker to speaker, twisting from confusion to euphoria and back again.

But it’s at the mid-way point when the highlight of the EP surfaces in the beautiful ‘Pitter Patter’. An organic construct reminiscent of Richard D. James Album era Aphex Twin, that does what it says on the tin by mirroring the sounds of rain falling on a pond; exposing fascinating patterns from the juxtaposition of complex rhythms. This pinnacle piece of composition will undoubtedly work its way onto many “greatest moments in electronica” playlists.

Analogies can be hurled at Bare Blips all day; it’s like a Commodore 64 in a tumble dryer or survival-horror-dubstep readily spring to mind. But when all is said and done, this self-assured and dexterous opening volley of material kicks open the door and places Redinho near the very top of the “ones to watch” list.