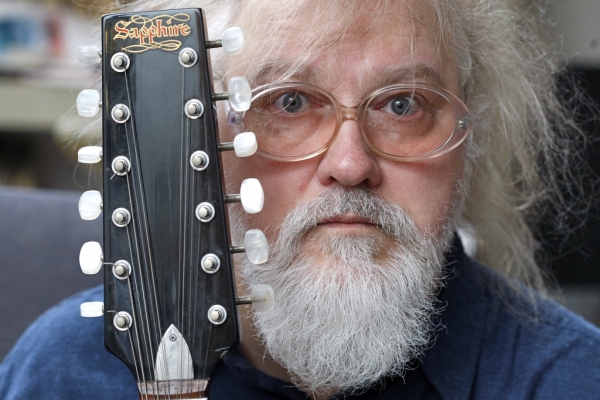 Looking back at the colourful cavalcade of cartoon images from the rose-tinted living room of your early life you’ll often find that there was, perhaps, a lot more going on within the realms of Saturday morning cartoons than your young eyes were able to perceive at that time. It’s an old cliché that adults watching kids’ TV will remark as to the volume of drugs the writers must have been on when they committed ideas like Ninja Turtles and space-bound hares to paper, but it also holds some truth. The brain on drugs is much like the brain of a child – you’ll notice similarities between the behavioural patterns of a guy on a ton of MDMA and a lil’ brat amped on aspartame. Cats in orbit is a fine idea both to little ‘uns and wreckheads.

Where’s this all going? You may well ask. R Stevie Moore is here to tell you where. Nowhere in particular I’m afraid but as long as it feels right, or half-right or failing that, downright warped and weird, it’s probably a semi-coherent metaphor for his music. Moore is, when we break it down, the audio representation of the moment when you come of age during one of those psychedelic cartoons. He’s the clown with a hand on your shoulder for one of two reasons. Maybe three.

Moore has, we must trot out, released upward of 400 albums via the media of vinyl, tape, CD-R even VHS tape over the last near-forty years. Tim off of The Charlatans loves him (and is in fact releasing this on his own label); he’s been embraced as a counter-culture something-something by whomever in New York and, well, after many years in obscurity, his star is beginning to shine a little brighter. This is delightful news for an extremely willful and exotic character with a shard of brilliance dug deep into the pleasure centre of his left brain.

This “best of” – there are no hits to speak of so they’ve kinda plumped for the most commercial-sounding ones – is a brief toe-dip into the animated world: imagine yourself as the blonde girl from Poltergeist staring into that fucked up TV and pushing a finger through into the beyond.

Here we have a clutch of lean-to pop songs like opener ‘Pop Music’ – an AOR tune fed through an infant’s sensibilities and David Baker delivery. It’s a faxed, photocopied and hand-altered version of mainstream music with all its darkest corners highlighted garishly in marker pen. There’s the proto-electro of ‘Dutch Me’ which shares some lyrics with A-Ha’s ‘The Sun Always Shines on TV’ and conjures a momentary but wonderful image of Moore and Morten Harkett switching careers. He woulda been great on Going Live! Here Moore’s voice, as it often does, wavers wildly, wandering across octaves, unsure of where it wants to be before jerking into a bluesy growl.

As on several of the tracks the combination of blind repitition and sudden, jerking left turns is unsettling but unquestionably original. The fact that many of the choices here paint Moore as a kind of burned-edge facsimile Randy Newman gone twice through the psych shredder does little to dispel the faintly queasy nature of the work.

There are so many more baffling ‘pleasures’ here. The bubblegum power pop of ‘Why Should I Love You’, spurting and sicking up Raspberries melodies over Gruff Rhys’ shoes; ‘Showbiz Is Dead’ – a squelching, shredded VHS version of experimentia with a shoegaze guitar tucked under its arm and the telling line “Look at me singing a song/It don’t sound like any other”. There’s also the beaten Joy Division beauty of ‘Big Mistake’, all rumbling bass, illogical chord progressions and fleeting transcendence, and the bedsit epic ‘I Got Into Your Mind’ – a restless sleep of a song that raises a notion of Wayne Coyne at his most human, his least bombastic. “Your brain wants/Your brain gets” he breathes, a bed-ridden barbiturate Bowie. When it moves into near-Massive Attack breakbeat it nearly brings a string induced tear to your squeegeed third eye.

There’s even more confusing, hair-raising gear here too – like the magled TDK90 of ‘The Winner’ – surely a Graham Coxon fave, or ‘You and Me’ which takes the basis of ‘Twist and Shout’, twists harder and swops the shout for an atonal, heavily-accented horn of a voice dropping sweet/dumb platitudes like “I love you and I miss you” as if trying to disguise itself as part of the legit genre rather than a funhouse mirror reflection of the same.

A key thing: he doesn’t reach out to grab you necessarily, you have to meet him halfway. As colourful and vivid as some of his material is, it’s still somehow insulated, separate and at a slight distance from “casual” listening. Among the tougher trawls are the ominous ‘Hurry Up’ – the sound of a garage band drugged to the point of collapse but still fuelled by frustration – and the almost-emo (yep) of ‘Sentimental Ties’. There’s even a horrid nod to classic rock on ‘Little Man’, all complex metallic riffing, laser beam effects and bullshit lyrics. Urgh.

These are the aftershocks of modern music, ya know? The disturbed reverberation of the colour and sound that push into the mind through radio and TV over a lifetime. They’re out there on another plane with the poltergeists. Moore is up there with the space rabbits, in the sewer with the mutant turtles and all over everywhere else magpie-ing ideas and concepts, allowing his warped thoughts to turn into half-lit dreams.

Anyway, get to youtube and watch all of his amazing homemade videos. Then buy his debut proper (Phonography) and then get this to win over your mates with. They may think you’re fucked on drugs, but they may also think you’ve found your inner cartoon kid. And we all need one o’ those.