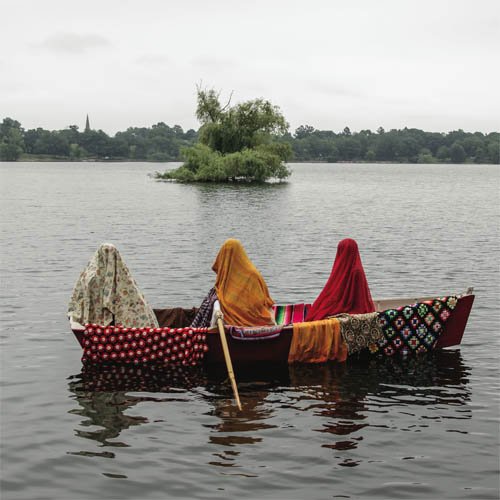 It turns out spending 60 hours in a basement recording your second LP can be a pretty good use of one’s time. With Hope in Splendor, Boston trio Quilt’s second record, visual arts students Anna Fox Rochinski, Shane Butler, and John Andrews rejuvenated their version of psychedelic 1960s pop, this time focusing on warm harmonies and new instrumentation. The result is an album that will take you on an uplifting journey, not dissimilar to the undulations of a (orange shag) magic carpet ride.

Opener “Arctic Shark” is a lullaby that tells the tale of its namesake. A prominent sitar-like guitar bridge introduces the album’s experimental leanings, suggesting that their genres’ tried and true mythologies are about to be expunged. We hear The Beatles on “Saturday Bride”, with its slowed down harmonies and an instantly familiar melody featuring alongside a cascade of vocals. Throughout the record, variations in tempo and instrumentation provide an academic quality and strong visual cues that only art students could manifest. Channeling The Byrds, the Mamas and the Papas and Jefferson Airplane, a strong bassline and altogether fuller sound appears on “A Mirror”, while on “Tired & Buttered” a quicker, rockier groove and the inclusion of a saxophone gives the album a welcome kick halfway through. Harmonies shine through in almost all of the tracks, with Rochinski’s vocals pairing nicely with Butler’s to create a sound that screams confidence.

Held In Splendor’s strength comes from the addition of some new instruments (with the help from some friends), which imbue tracks with a soft warmth and glow, and otherwise uplift the 60/70s psych genre they inhabit. Piano, violins and cellos appear on “I Sleep in Nature” and “Mary Mountain” which blow out any simple attitudes held against the psych-rock genre out of the water.

The 13 tracks on Held in Splendor are stitched together seamlessly, despite their patchwork like qualities. It links the band with the psych-rock successes of Tame Impala’s Lonerism and, more recently, Connan Mockasin’s Caramel, and is an excellent showcase for Quilt’s progression as songwriters. It’s is a fluid, cohesive album that flows seamlessly from one movement to the next – as its cover suggests, it’s a canoe ride without the possibility of capsizing.