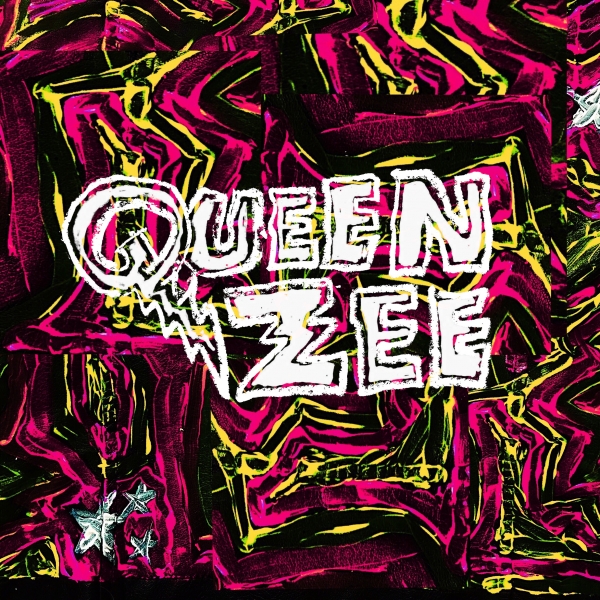 Liverpool’s Queen Zee have been ramping up momentum in volume and velocity for the release of their long-awaited debut album.

This record marks their the first, bold step towards carving their legacy – even if that means breaking a guitar and a few bones on the way. With an orb of garish proto-punk firmly grasped in one hand and a sceptre of solidarity and bravery in the other, this is the coronation of a band who have waded through gender dysphoria and homophobia, only to emerge the other side as icons for the ideology they represent.

Queen Zee are here to put on a show that incites a mushroom cloud of anarchy, frazzling your brains with a shock of colour in a genre defined by mawkish men in black. This debut album proves that even in the studio, Queen Zee know how to put on a show. The album opens with a two—second hesitance, and that is all the mercy you’re afforded – from that point on, you are plunged at a neck-breaking speed into anarchic world. You won’t have the chance to gasp for air again.

"Loner" sets the precedent as the call-to-arms for misfits, with a chorus which is nothing short than anthemic. This, much like every track on the album, is primed for stage, created fresh for the devouring. Unlike many bands, though, Queen Zee don’t flounder when it comes to converting their live energy to a record. Frontperson Zee spills their vocals like they had a swarm of wasps in their mouth; their voice is stung, churning their words and drawing them out like a wad of chewing gum.

The album also aims to reawaken the satanic-panic, leaving your grandmother white in the face from the glee with which they’re inverting crosses. You don’t even need to play "Lucy Fur" (get it?) backwards to hear the hellfire of Queen Zee. Hiccupping, Marilyn Monroe-esque coos make the track a nightmarish soundscape; a chorus dripping in lurid glamour is topped off with a resounding, “Fuck off! Hail Satan!” It’s a pastiche of themselves, an exaggeration on Rocky Horror proportions, made to revolt small minds.

This sense of mischief is what makes this album so rewarding. It’s worth keeping yourself alert to Zee’s fiery quips – "Boy Mastered" is over-brimming with them. “New gender, who dis?” They taunt.

Droning guitars announce the arrival of "Sissy Fists", taking aim at transphobic and homophobic abuse. Zee screams, with a fury that sounds like a rusty switchblade, “Raise your sissy fists!” over and over until the track knots itself tightly in a ball of venom and hurt. It draws you out, holding you in suspense until it finally begins to unravel in a morass of spiralling guitars, screeching feedback and guttural cries. "Sissy Fists" is so primal and undeniably catchy that it’s bound to be your personal highlight.

Queen Zee take you further down a path of vices. "Hunger Pains" is an ode to cocaine and the downward spiral of frenetic addiction. False promises of “I’m going to quit tonight / But first pass me the card” are spat through gritted teeth, propelled forward by melodic guitars. It’s two and a half minutes of the ugly euphoria of escaping your own head.

"Anxiety" is the hangover – it’s the price you pay. The instrumental lollops as Zee croaks, “I don’t feel well today,”, a grey cloud hanging over their head that a few hours of sunshine can’t shift. It’s perhaps the most tuneful track on the album, yet the guitars still quake like unsteady hands. It trails away to a faintly mocking rasp, “Not well at all”, with a weak laugh at the end – maybe a laugh of self-pity, or a laugh resolving to do it all over again.

The final track, "I Hate Your New Boyfriend" is the one you’ll play on repeat, and no doubt scream until your throat gives out at their upcoming UK tour. “Don’t you think he looks like Kurt Cobain?” a voice drawls, with the quick reply, “More like Courtney Love / After she went insane”. It’s a song of barely-concealed bitterness and jealousy, conjuring a particular ugliness we’ve all experienced. It’s an exploration into vulnerability, and the layers of hostility we protect ourselves with. They play like they’re trying to tear the song apart themselves and maybe take down whoever’s listening, too.

The spectacle of Queen Zee and their sonic plumage is just a distraction from the undercurrents of feeling in this album. They’re unafraid to care; unafraid to lay these feelings bare. Theirs is a vital voice; Queen Zee are the band we need right now.