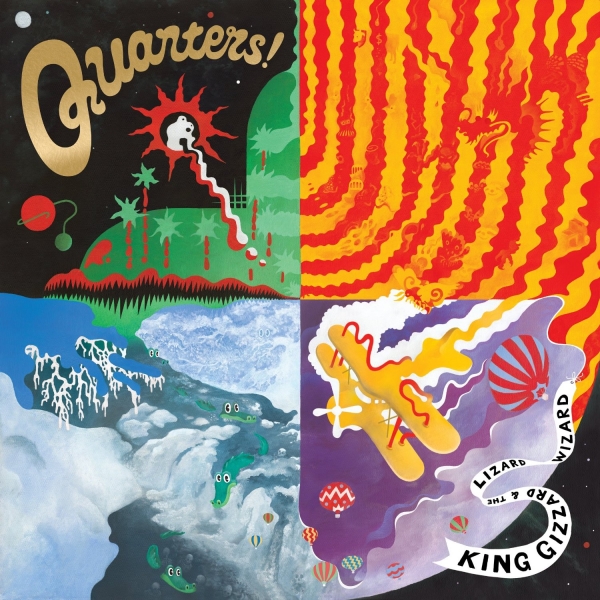 Australian seven-piece King Gizzard and the Lizard Wizard have been around for some time, but it wasn’t until last year’s I’m In Your Mind Fuzz that their blend of strung-out psychedelic garage rock propelled them toward widespread attention and acclaim.

Anyone expecting more of the same from Quarters might be let down, but at least half of the record is a fittingly weird kind of progression.

Every release by Gizzard to date has found itself a varying flavour of lo-fi, and Quarters is no exception. It's a much more mellow affair than the frenetic chaos of last year's Mind Fuzz, and a more fitting accompaniment to a drive on a humid night than the hallucinogenic quantum-leaping of that last record.

True to its name, the album is one of four distinctive quarters: the record clocks in at 40 minutes and 40 seconds, comprising four songs, each of them 10 minutes and 10 seconds long.

“The River” opens with a stop-start guitar that's been pushed through layers of filters, providing it an authentically late-60s, scratchy, vinyl sound. Driven by mid-paced, rolling drums, the song effortlessly glides from an approximation of dreamy British invasion pop into all-out jam-band territory. A repetitious bass hook dances around and through the transitions, and guitar solos high up on the fretboard put a stop to any sense of going stale. This is all quite indulgent stuff but the ten minutes just gel. Under halfway through, “The River” is reminiscent of The Doors at their most relaxed and zen, a tribute to the idea of blissed-out west-coast psychedelia. A bluesy harmonica hums along beneath the good trip.

The tone changes significantly for “Infinite Rise”, a rather humdrum slice of pop that feels like it's just stretched too thin to last as long as it does. Three or four minutes probably would have done.

The same can be said for “God Is In The Rhythm” - although it's catchier, the track regresses from its endearing doo-wop, laid-back rhythm and blues into a gradual meandering yawn. Neither song is actually bad per se - they may have found their place on a record that didn't make such a noticeable point of being four songs long. When an album's so obviously of that length the desire to skip one or two tracks carries more weight.

Although the concept's of four quarters the result is that it could have done with exactly half of them. Quarters works when the songs are allowed their freedom to go where they please; “Infinite Rise” and “God Is In The Rhythm” both feel laboured and contained, forced to fit in with the overarching theme of the record, and that's so at odds with Gizzard at their best.

That said, the opener and closer are a real treat, and it's a shame that they weren't packaged together where they would have made a shorter but more satisfying whole.