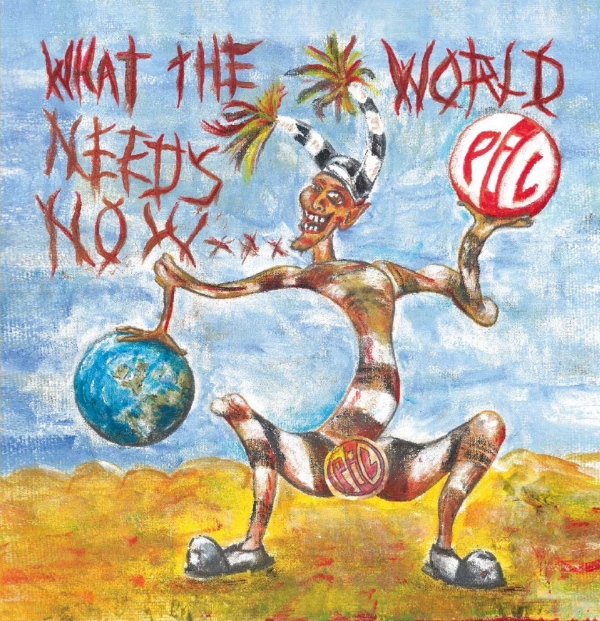 This is a tricky one. Public Image Ltd.’s tenth studio album, What the World Needs Now, is a record of great spirit and assertion, John Lydon remaining one of modern music’s most charismatic voices. Throughout the album, he is as wild-eyed, impassioned and indignant as ever, and, forty years into his career, his voice is in remarkable shape.

On the record’s gentler tracks, such as “The One”, he adopts a vibrato of genuine tenderness; in more propulsive contexts, like “I’m Not Satisfied”, he demonstrates that he has lost none of the old menace.

Unfortunately, the problem with What the World Needs Now lies not in its spirit, but in its songwriting. Despite the insatiable anger and burning intellect that fuels Public Image Ltd., there are few moments here where the music does those admirable qualities any real justice. The songs that come closest are the aforementioned “I’m Not Satisfied”, a tightly-wound update of “Death Disco”, and “Big Blue Sky”, a paranoid, delicately constructed dub soundscape. #

Elsewhere, the record too often slips into self-parody; single “Double Trouble” is exactly as lumpy and dad-rockish as its name suggests, and “Bettie Page” is a half-baked anti-US rant, from which all wit and subtlety is sucked by Lydon’s inexplicable adoption of a hammy American accent. “C’est La Vie” fares a little better, but its cyclical plod dramatically outstays its welcome – it just doesn’t need to last for six minutes.

On pretty much every track, the instrumentation is formulaic and predictable - the band that once contained Jah Wobble and Keith Levene seem to have spent their time trying unsuccessfully to replicate the unique power of those two musicians.

It’s a real shame, because PiL at their best are of vital importance, and Lydon is indeed a national treasure. I really, really wanted to love this album, but it undeniably falls short. As I’ve said, this isn’t a record entirely bereft of merit, and it is those brief glimmers of the band’s former brilliance, along with Lydon’s gravitas, that save What the World Needs Now from dissolving into the kind of turgid mess it regularly threatens to become.

Yet I cannot escape this nagging question - if this album was released by another group of middle-aged men fronted by an anonymous (rather than revered) firebrand, would anyone take any notice of it? It’s hard to say.