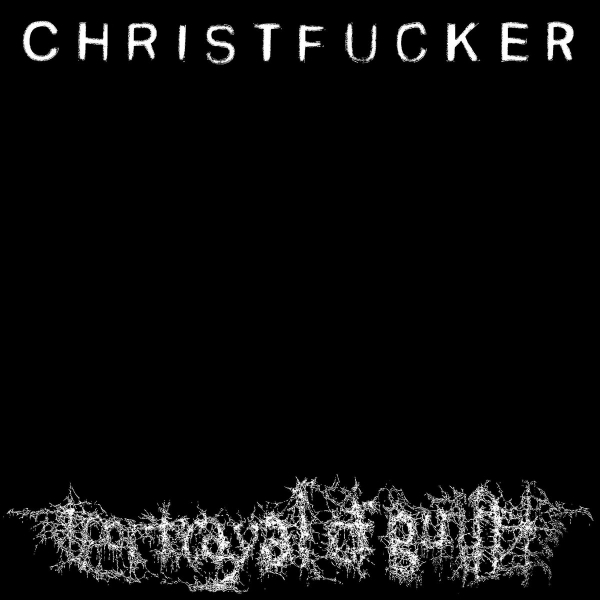 Portrayal of Guilt has had a productive year. In January the Austin, Texas trio—currently comprised of the pair of founding members, vocalist/guitarist Matt King and drummer James Beveridge, as well as bassist Alex Stanfield—put out their excellent sophomore LP, We Are Always Alone. Then in August they released a 7’’ split with Chat Pile. Now they’re releasing the equally-great CHRISTFUCKER, their second album of 2021 and third overall, in the middle of the band’s first tour since the pandemic began. PoG are making up for lost time, as it were.

Speaking of, loss is a major theme of the band’s catalogue: loss of emotion, of will, of empathy, of belief. Indeed, a sense of nihilistic disconnection—from society, or even from reality—winds through the band’s lyrics. “The darkest corners of the mind aren’t as filthy as the outside” (from the vicious Suffering is a Gift EP) and “This burden of living never seems to end” (from Alone) could both act as a thesis statement for PoG. Loss also appears as abandonment, often coming in the form of a grave and/or being buried—an escape from the near-constant suffering of (or through) existence, perhaps literally.

So of course King, using both his paint-chipping shriek and his concrete-splitting death growl, takes abandonment and life-is-pain to the pair’s logical conclusion on CHRISTFUCKER: BDSM. Whether literal or figurative, King shrieks and growls about being chained or tied and having his life threatened, and (mostly) enjoying it. Witness these key lines from “The Crucifixion”: “My body aches for pleasure / My mind aches for happiness / You can’t take this from me / Steel to my bones like a hammer to a nail / A euphoric pain / Torture me the right way.” Elsewhere, sometimes King is the one doing the sacrificing and/or torturing, and sometimes he’s in the middle being pulled in both directions by angels and demons fighting over him (again, perhaps literal and perhaps figurative).

Yet, what’s most striking about CHRISTFUCKER is the songwriting. PoG has made deeply unsettling music since its inception. The band’s sound—an aggressively ugly stitched-together monstrosity of powerviolence, black metal, death metal, and industrial—has slowly evolved over time, with the band using every release to explore, experiment, and fine tune. For their debut LP, 2018’s often-great Let Pain Be Your Guide, they took the seasick clean guitar from their “Chamber of Misery Pt. I” 7’’ and added a dash of post-punk to their sonic maelstrom. They even toyed around with a guitar hook during “Death Is Gentle.” Then on Alone, PoG took those clean guitar and post-punk pieces and tried out traditional rock songwriting structures, while keeping intact their feral side.

And while CHRISTFUCKER is mostly devoid of the band’s more intense moments—“A Burden” and “Merciless,” say—and instead operates largely in a death’n’roll mode, it’s still a lot to process, both musically and lyrically. Indeed, all three of the trio’s albums are under a half hour and they’re still overbearing. Of course, a band called Portrayal of Guilt indicates by itself that it won’t be an easy journey. This is purposefully difficult music with very little in the way of hand-holding via melody or catchy riffs. Yet, in the end the potential reward is revealed: if you’re willing to brave the torment (of PoG’s music or of life, or both), perhaps you’ll achieve something like catharsis and be better for it on the other side.