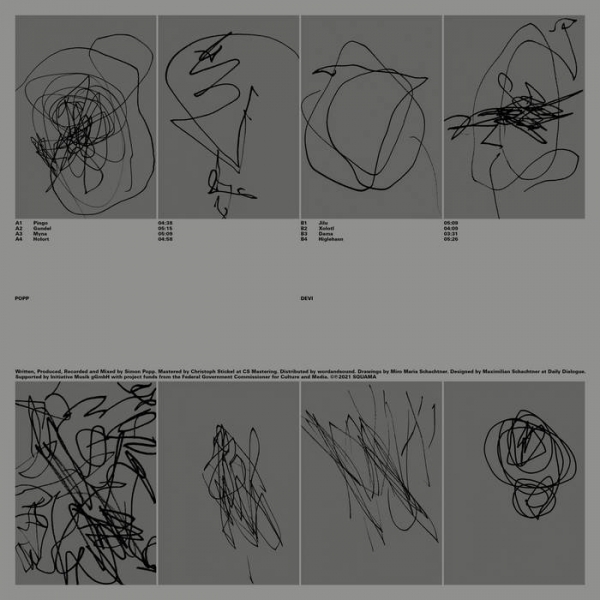 The new album from German drummer Simon Popp - known as Popp - is a wonderfully detailed, idiosyncratic record; the melodies across the 8 songs that make up Devi are largely loops built from pitched gongs, bells and steel drums. It lends the album a pleasingly dystopian and slightly mechanical feeling that recalls Japan’s masterpiece Tin Drum, albeit without David Sylvian crooning over the top.

At its best, this is music you can get totally lost in, where the lines between organic and electric are blurred so as to be indistinguishable. Repeated listens reveal new textures and the linear structure of the music allows an idea to form gradually, this is done particularly well on "Myna", an early album highlight that utilises gated reverbs to hypnotic affect.

Unless you are listening to Devi the whole way through and focussing intently, it could pass you by as it is in the details and flourishes that most of the interesting things happen; listening in the background could make every song sound like a 5 minute drum loop. That isn’t the criticism it might sound like though, as not all music is designed for the same purpose, and this is very much one for audiophiles and patient listeners alike who find pleasure in slow building cosmic music.

The album was written and recorded in Popp’s hometown of Munich over lockdown, normally a prolific live performer, it gave him the time to explore different recording techniques. It was a time in his life where he had to find influence from different sources, and - as with a lot of us - had to cope with a lot of ups and downs. The album name Devi is a reference to dualism, which the album displays throughout, switching between light and dark, playful and sinister.

This is an exciting record for drum music, formed in a quietly burgeoning scene in Munich built around an exciting new label, Squama. The rich history of German kosmiche has another album worthy of being more than just a footnote.