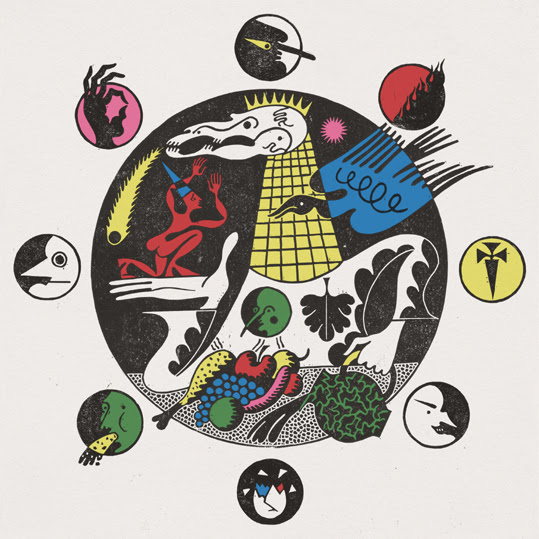 Now, with four of six tunes stacking up to over 6 minutes each, time doesn’t exactly pass by in a pinch on King of Cowards, but 2017’s Feed The Rats, with its lumbering bookend tracks clocking in at around 20 minutes apiece, was in desperate need of the scalpel. Spread across fewer, gnarlier parts, King of Cowards adds up to a stronger statement from a good-time band, simply because there’s more of what counts: riffs.

But this good-time band has a guilty conscience. On opener "GNT", the titular king of cowards slumps on his couch before the news, a menagerie of grisly death and cosmic misery: “I feel fine in my house” he concludes. It’s all too easy to visualise ourselves as the cursed monarch, slumped on a self-made trash throne like a Dark Souls II arch foe, eyes closed to the putrified world seeping in through shut curtains. “Demons are easy to love”, bellows Matt Baty on the next track "Shockmaster", finding commonality between listener and speaker in blissful inaction.

Recall for a moment the fluid, buoyant motion of Kraftwerk’s "Autobahn", weaving between cars at constant motion, stereotypical of German engineering ingenuity post-WWII. "A66" takes every opportunity to release the accelerator, stopping for a kip or a toilet break at every available motorway services. It’s a sardonic entry in the great compendium of Songs About Roads, a deft satire of both industrialised modernity and UK alt-music press’ fascination with New Weird Britain, the “scene” spread across the cities of the TransPennine expressway. “I felt tired”, yells Baty. The motion sickness is also palpable.

The album’s bacchanalian revelry reaches its height on standout track "Thumbsucker", which features Sam Grant and Adam Ian Sykes’ crunchiest guitar work, and reads as anti-kinkshame treatise. One suspects it’s played for laughs (“I like it when you rub my tummy / and let me suck my thumb”), but it toes a fine line between comedy and a call for acceptance (albeit in the form of a grown man in a nappy).

We close the album with "Gloamer", which is somehow more disarming than any ABDL fantasy at play. “Breathe slowly now, hold, then push it out”. “You’re worth a lot, life may hold you down / stop, and take it in”. “Talk, and talk a lot”: one suspects this to be Pigs at their most subversive; music with a masculine swagger, lyrically opposing stoic masculinity.

Not only is King of Cowards Pigs’ best release, the promise of their previous work fulfilled; in a year of hip hop and R&B dominating charts and critics’ minds alike, it’s probably also the best time you’re likely to have with a rock album in 2018. More than that, it’s tempting to call a group of Newcastle lads with a daft name one of the UK’s finest.