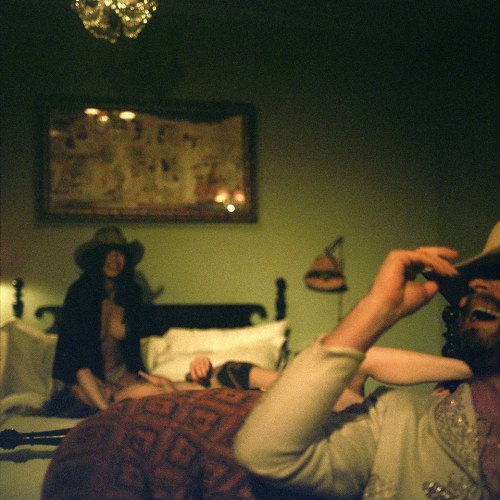 In the Phosphorescent story, Muchacho could be seen as the next step in a (very) loose thematic continuum. If the spit-and-sawdust swagger of 2009’s tribute album To Willie represented the party at the end of the low-lit, introspective isolation that characterised Pride (2007), Muchacho suggests the (relatively speaking) good times that fired up Here’s to Taking It Easy (2010) have crashed to a halt. There are many lyrical allusions to heartache and partings. A sense of loss and regret over past misdeeds hangs heavy over many of these tracks.

Then again, where would songwriters be without trouble and strife? Adrift, or else peddling lightweight fluff, most likely. Matthew Houck certainly come across more confidently on the sadder side of the honky tonkin’ Saturday night/regret-drenched Sunday morning divide that fuels much of the country music that the Phosphorescent mainstay is obviously still influenced by (see the afterhours-at-the-hoedown shimmer of ‘Muchacho’s Tune’). After all, even the superficially carefree Here’s to… ran on a rich current of melancholy.

The story is that Muchacho began as a collection of experimental soundscapes, until Houck returned to his base in Brooklyn after a long spell of touring to find a disintegrating relationship and an eviction notice. Soon, songwriting juices were flowing again. A good thing: although Muchacho can initially seem almost confrontationally slow-burning (there’s no obvious standouts such as ‘Wolves‘ or ‘Nothing Was Stolen‘ to grab your attention instantaneously), it rewards patience amply. The synth-driven ‘Song for Zula‘, for example, sounds like a monotonous exercise in repeating the same three chords from here to eternity at first, but gradually blooms into a majestically world-weary road song reminiscent of Springsteen at his bluster-free best.

The communal country-rock grooves familiar from Here’s to… are a distant memory, and there’s barely a hint of Pride‘s cosmic Americana, either. Muchacho is very much a solitary pursuit, with Houck multi-tracking instruments and voices, dabbling in electronics and inviting guests to contribute when required. The compelling, echo-laden depth of detail that emerges is nothing short of hypnotic: trumpets, pedal steel and other assorted trinkets drift in and out of the mix, often so subtle you feel more than hear their presence. Throughout, Houck solidifies his standing as one of the most remarkable voices around. Occasionally, his loose phrasing takes proceedings to the verge of slipping out of tune, but Houck manages to make the resulting cracks sound hugely appealing. On the spooky ‘Terror in the Canyons’, he can be heard whooping in the distance, as if encouraging his beyond-wounded lead vocal to make it to the end, whilst trumpets conjure images of acres of arid desert emptiness that match the song’s end-of-the-rope sentiments (“You’re telling me my heart’s sick/I’m telling you I know/You’re telling me you’re leaving/and I’m telling you to go”) perfectly.

“You say, you’ll spin this heartache into gold” Houck croons on on the wounded, wonderful ‘Down to Go’. Whether that’s any consolation for the songwriter is very much debatable. From a listener’s viewpoint, however, this atmospheric, rewarding gem that, despite its decidedly downbeat subject material, hops effortlessly over various woe-is-me traps is certainly worth the trouble its author’s had to go through to produce it.