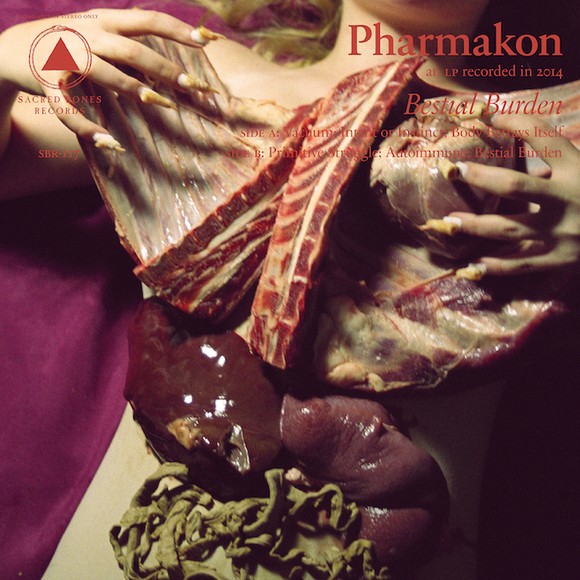 Bestial Burden, the second album by US noise artist Pharmakon, opens with the sound of Margaret Chardiet’s panicked breathing. It’s not soothing, hearing the sound of someone hyperventilating in the name of art. But what “Vacuum” represents is Chardiet’s realisation that her body is fragile, and could be about to betray her at any moment. That’s enough to make anyone breathe a little quicker.

On the eve of a European tour for Pharmakon, Chardiet became ill and had to undergo emergency surgery to remove an unspecified organ and was left bed-ridden for three weeks, not knowing when her body would be fit enough to resume playing and touring. While the physical aspect was difficult enough for Chardiet, it took some time for her brain to catch on and realise that there was a problem, and it’s this disconnection that dominates the quite incredible Bestial Burden.

Alongside breathing, there’s also the sound of Chardiet coughing and choking, and sounding like she’s having an episode of some kind on the final track “Bestial Burden”; while all this might sound like unlistenable tosh, and there’s little doubt this is a harsher and more difficult listen than debut album Abandon, this is noise/industrial music that demands to be heard. If you don’t think you’ll like noise music, think again. This isn’t just about the music, Bestial Burden impacts on the listener in an emotional and physical level that’s extremely rare. It’s not just one of the records of 2014, it’s the greatest document of the fragility of the human condition I’ve ever heard.

Returning to that hyperventilating opening, you can hear the sound of two Chardiet’s breathing as the track reaches its end. One of the double tracked voices sounds utterly relieved and relaxed as the breathing becomes more regulated, but the other remains terrified and panicked, filled with the realisation that there are some things that remain completely outside of our desperate need for control. Although it’s the shortest track, “Vacuum” stands as the most important moment on Bestial Burden and sets the tone for the emotional and physical horrors which follow. The hum and tribal percussion of “Intent or Instinct” seems to serve as a gentle introduction to the album proper before lurching, sickening synth noise bounces back and forth between the speakers while Chardiet summons a guttural scream from within her wracked body. It’s worth noting that Pharmakon’s voice work has gained intensity on Bestial Burden thanks to Chardiet recording her vocals with people packed into the recording booth with her in an attempt to recreate the intensity of her live shows. When the screaming finally appears on “Intent or Instinct”, it’s incredibly powerful and I almost found myself reaching for the “off” button due to just how emotional and raw Chardiet sounds.

Yet despite how confrontational and intense (and deeply personal, in a way) the album is, it’s one that becomes more and more alluring with each play. “Body Betrays Itself” is constructed out of brutalist simplicity: all it is, is a primitive beat; buzzing electronic noise and Chardiet’s full-bodied roar...repeat for five minutes and then try to compose one’s self. The short “Primitive Struggle” creates a fractured beat from Chardiet coughing and spluttering as industrial pulses and detuned piano gather pace behind it, while “Autoimmune” finds Pharmakon at its most accessible with direct percussion resembling early house music; yes, there’s still industrial clangs and Chardiet is on furious form but if you’re looking for an entry point it might as well be here.

When we reach the title track, and closing song, Chardiet is almost a spent force. With the realisation fully upon her that her body is betraying her, the panic and terror reach an apex (or nadir, depending on how you’d like to interpret it) with “Bestial Burden” and all of the anxiety rushes out in the form of this aural assault. Chardiet breaks down in manic fits of laughter as the noise builds and jerks and spasms all around her. It’s astonishing to find a track so completely involving, and a piece of music that shakes you to your very core.

But then that’s what happened to Chardiet; her body was debilitated and her mind couldn’t cope or understand, and the only way to process it was to create this document of the realisation that we’re helpless: death is inevitable and we don’t know what’s on the other side, so while we’re here just put everything into it. Bestial Burden is the sound of Pharmakon doing exactly that.