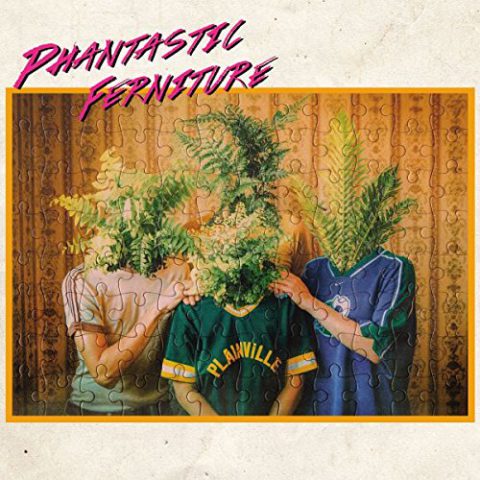 Some of the best songs ever written are steeped in heartache and sadness, but sometimes, music just needs to be a bit more…well…happy.

Sydney-based folk artist Julia Jacklin made her name with the melancholy alt-country of 2016’s Don’t Let The Kids Win, an intimate tearjerker of a record with a deeply emotional core. But two years on, she’s in an altogether different mood. “I would love to know what it’s like to make people feel good and dance”, she stated after recently forming garage pop trio Phantastic Ferniture with old friends Elizabeth Hughes (guitar) and Ryan K Brennan (drums). The band’s self-titled debut doesn’t disappoint: it’s an upbeat peach of a record that has the potential to turn multiple frowns upside down.

Beginning with the surf-inspired intro of "Uncomfortable Teenager", the album immediately unleashes positive vibes. The addition of Hughes and Brennan works wonders in providing the backdrop to Jacklin’s wide-ranging vocal work, which breaks free from its folk shackles and finds solace in reverb-soaked euphoria. Think Best Coast’s sharp indie riffs and Amber Arcades' jangly dream pop and you’ll be closer to understanding PF’s musical mission statement. Or just simply listen to “Fuckin and Rollin”, a brilliant summer pop anthem with the most satisfying bassline you’ll hear today. There are some slower tracks like “Take It Off”, but its juicy central riff allows it to avoid plodding. “Gap Year” and “Dark Corner Dancefloor” find the perfect pace for the band’s sound, the latter bursting off into the horizon in a blaze of desert-tinged psych rock.

Jacklin certainly succeeds in her simplistic mission to ‘make people feel good’ here. It may not contain the most amazing songs ever written, but Phantastic Ferniture is pumped with enough care-free energy and catchy pop hooks to brighten up the darkest of days.