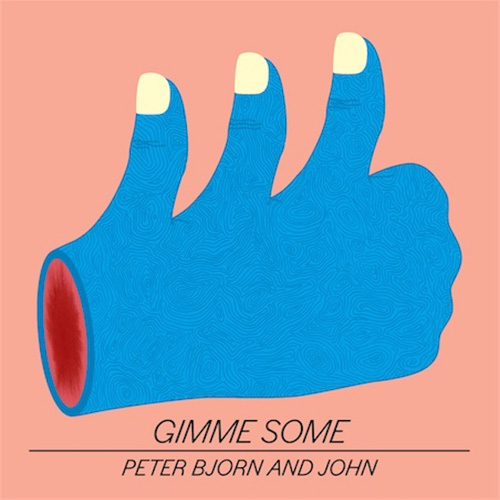 Gimme Some - not to be confused with Jimmy Bo Horne’s 1977 single of the same name, is the sixth album from the ever approachable, distinctly likeable Swedish pop rockers Peter, Bjorn and John – and it’s a complete treat. The electronics flaunted on 2009′s Living Thing appear to have gone elsewhere, leaving the band to get back to what they do best – bashing out killer, summertime hits.

Gimme Some is a riot of an album from opening track ‘Tomorrow Has To Wait’, which sets the tone and the tempo immediately. This is an album that’s incredibly easy to sink into: it feels welcoming, fresh and vibrant. The completely irresistible ‘Second Chance’ is a track sure to be infiltrating bar soundtracks, club nights and leaking out of headphones on public transport all over the place, in the very near future. As will most of the songs on this album: pop songs – not throwaway, insipid pop songs, but readily relatable and perfectly catchy tunes which leave you feeling just that little bit perkier than you did before.

It’s indie-pop in its best light, a kind of music which Peter, Bjorn and John have, throughout their twelve-year career, become very good at making.

The pace throughout Gimme Some is consistent, the songs speed by in a frenzy of cheerfully picked guitar melodies and rumbling floor toms – continually maintaining the euphoric tone of the album, right up to the ninth of the eleven tracks on the record. Here, the pounding rhythm is slowed to allow just a touch of melancholy to seep into the otherwise gloriously up tempo album. ‘Down Like Me’ gives us a second to breathe, to reflect for just a moment before returning to the preceeding, heady pace of the rest of the album. Closing track ‘I Know You Don’t Love Me’ is a second relatively gentle, slightly quieter song which places a driving bass-line and reverb-laden vocals at the forefront. It’s a steadying, cooling track to calm things down before skipping back to track one to try it out all over again.

The relentless tempo might eventually become monotonous if it wasn’t such a consistently engaging album – and one which flies by. A timely March release date gives the album just enough time to simmer gently under the radar before bursting onto festival stages around the world and enamouring all that dare take them on.

This album was created by a band who have realised that their concern lies not in impressing others, but in creating an album reflective of themselves and their space in the world at this particular moment. As such, there’s an over-riding feeling of contentment, of considered carelessness – an album made to please nobody but themselves and thus incredibly endearing and undeniably enticing.

Maybe Gimme Some will be the one to make people realise that there’s a lot more to Peter, Bjorn and John than that insufferable whistle.