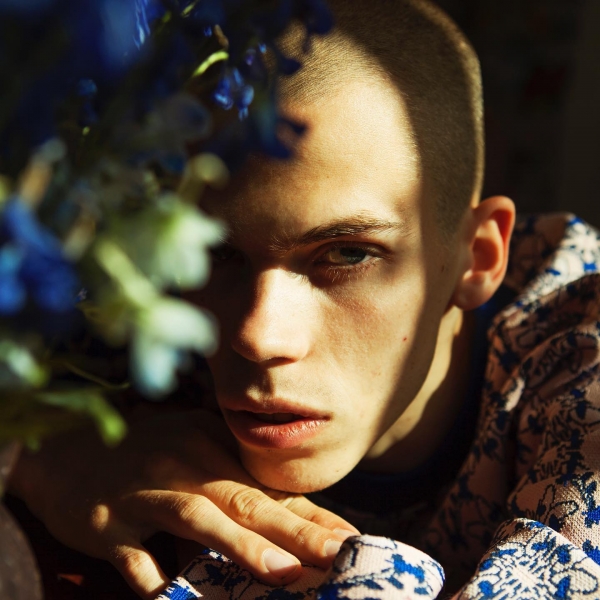 When you’re from an English speaking country, it’s quite easy to forget that artists from other places tend to have to bend their mother tongue to fit a more commercialised language in the hopes of success.

If artists don't do this, it can be isolating to an extent, but that's a small price to pay when you can explore the depth of your mind in the comfort of your natural language. For Norwegian rapper Håkon Stubberud, aka Pen Gutt (that's 'pretty boy' in Norwegian), he's done just this. Like a contemporary Lil Peep, he's crafted an album, all in Norwegian, which toys with the ideas of nihilistic philosophy.

Across Hold Deg I Varmen there is, of course, a focus on contemporary subject matter, and the extracurricular activities that fall into being a young person in 2019, but its strength lies in peeling away the layers revealing depth.

The artwork itself features Stubberud's Instagram model stare from behind flowers, surrounded by shade, but his face highlighted in sunlight. Rather apt imagery for an album that so quickly focuses on the seemingly vain aspects of youth culture while knowing they're immersed in a darkness brought on by previous generations.

In a world that is ever-increasingly submerged in the stark reality that maybe things aren't all okay, Stubberud’s generation growing up amongst the fray are certainly the ones facing it front and centre. To the point of treating the idea of death as normalcy that should be embraced, even toyed with.

On ethereal basked "dazed & confused'" he raps about "Mixing gin with some motherfucking juice / 'cause I've never believed in God" - the stark nuance of being a Gen Z'er never sounded so sincere. "Peters Evangelium", a brief almost-spoken word cut, deals with global warming and knowing we're in the make or break state - there is no do-over. It could be the globally growing strength but hearing sentiments from massive UK based acts such as The 1975, and in such seemingly opposing times, being echoed by those from European neighbours is beautiful.

However, not everything is as philanthropic. Falling into the same pitfalls as many rappers do, “Undercover" dabbles with misogynistic tropes, but as with everything Stubberud does, there's a facet that's not as it seems. It's a grim portrayal of his world, almost to the point of his becoming the anti-hero of a Bret Easton Ellis novel, his actions concealed by satirical mask in an attempt to wash away any ill-feelings.

Musically, Stubberud manages to keep a groove in the most consistent way possible. Not only do the individual components stand tall, but the inclusion of atmospheric interludes keep each cut, with their personal persistence and loaded sentiment, swirling onward.

Overall, it's a complex listen, that, if you spend the time diving into the lyric translations will offer a beyond pleasant and welcomed Ludovico technique into the mind of the modern world. That's not to mention the explorative sounds that ebb and flow, establishing a considered and promising name in a game that's thriving in a world that's on the verge of dying.