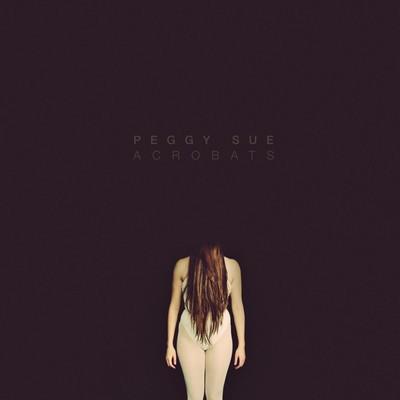 I have to confess that I didn’t enjoy the debut album from Peggy Sue, Fossils and Other Phantoms. It was a bit too “Mumford” for my liking, so I lumped it in with all the other folk/acoustic acts who were appearing around that time. Okay, so there was a darker element to the band, something a bit more brooding, but it wasn’t to the fore quite enough for me. Twelve or so months onwards, and this is some turn-up for the books. Ditching, for the most part, that folk sound, London-based Rosa (Rex) Slade, Katy (Klaw) Young and drummer Olly Joyce have gone electric, and Acrobats is a stormy and bluesy sophomore record, with the band sounding a lot better as a result.

Opener ‘Cut My Teeth’ signals the intent of Acrobats from the outset, a slow opening minute crackles with electric foreboding, with Rosa Slade singing “Once I held the sweetest heart / I cut my teeth upon his love / all I know now I learned back when his mouth would start / where mine would end”. Once drums and guitars truly kick in, Slade howls like vintage PJ Harvey before Katy Young joins in on harmonies. The song continues to rattle along with both women passionately pleading to “keep calm” as a hail of guitars rains down, and it ends with some awesome garage riffing.

One song in and you can tell this going to be powerful stuff, the change from the first record to this being really quite dramatic. ‘Song and Dance’ is a less intense affair, but no less brilliant with chiming verse guitar matched with a bluesy chorus that recalls The Duke Spirit at their visceral best. Again, the lyrics tell of a relationship gone wrong, with the closing mantra of “when will you learn you will never be first?” ‘Funeral Beat’ shows the benefit of Peggy Sue having a full-time drummer, with Olly Joyce’s stick work instinctive and trickily rhythmic, and his use of the kick drum dominates throughout not just this song but the album as a whole. The track itself has a nod to the folk side of the band, with some sharp acoustic guitar and droning cello adorning the maudlin track.

The interplay between the electric guitars and the voices of Slade and Young is the most thrilling aspect of the album; the apocalyptic ‘Changed and Waiting’ spirals and twists its way from start to finish, the guitars chasing the gorgeous vocals up and down the register, with the utter fury of ‘All We’ll Keep’ and the breakneck ‘D.U.M.B.O.’ keeping up a fantastic pace.

That’s not to say the slower moments aren’t golden as well, as the gloomy narrative of ‘Parking Meter Blues’ testifies to. Slade and Young’s intermingling a cappella voices sing “I kept one eye on the road, and one eye on the clock / the numbers told me so that nothing else had stopped….except you and I”, while some gentle glockenspiel and choppy guitar play gently in the background. ‘Boxes’ is similarly gloomy, with some wheezing accordion, and ‘Shadows’ is a creepy tale dominated by cello and violin.

The last word on Acrobats has to go to the electric Peggy Sue, and the violent ‘There Always Was’. Over the roar of guitar, Slade and Young cry “She sang on just a severed head / no arms, no legs, no mouth to beg” – it’s a graphic image and one that befits the power and anger of the record as a whole. The song goes on to cry “there’s trouble in my blood, there always was…there always was” and then, out of nowhere, we come to a full stop.

It comes as no surprise to find that John Parish produced the record, as the influence of PJ Harvey is writ large in the confrontational nature of the lyrics and the power of the music. Acrobats is an angry and uneasy listening experience, but it’s also a richly rewarding and layered record. By increasing the volume, Peggy Sue has unleashed a brooding monster that demands your attention. Essential stuff.