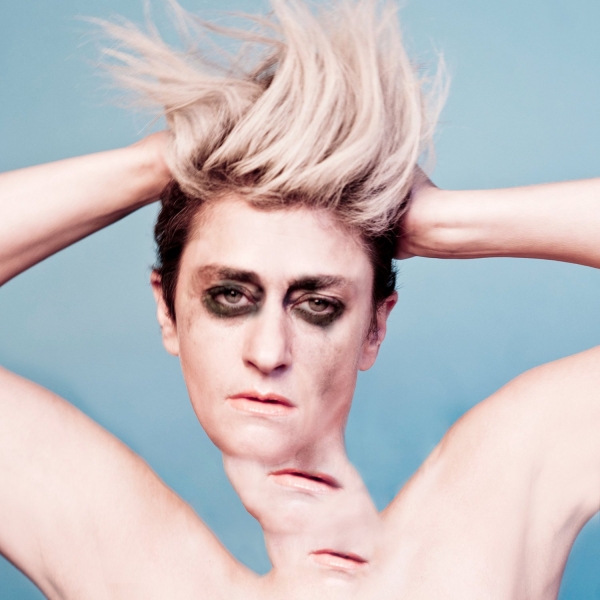 When Merrill Nasker came to prominence with the classic “Fuck The Pain Away” single and accompanying album Teaches Of Peaches in 2000, this kind of gender blending, patriarchy questioning, aggressive humanism laced with filthy sex rhymes was still a niche concern.

Fifteen years later, that niche is now pop music norm, Peaches’ confrontational fuck you pop manifests itself from artists as varied from the more esoteric likes of Planningtorock and the recently departed The Knife, to the vanilla pop of the likes of Rihanna, Nicki, Miley, even Taylor.

That’s not to say that we’re going to hear lyrics such as Rub’s title track coda of “Can’t talk right now / this chick’s dick is in my mouth - rise for me” in the top 40 any time soon, but Peaches’ validation means that her fifth album is as salaciously lewd as anything she’s ever produced. We're told throughout, and in great detail, about the amazing things that her vagina can do.

Stripped of the multiple producers that made 2009’s I Feel Cream (Soulwax / Simian Mobile Disco / Digitalism) her most focused, fully electronic and strongest release, this time round she enlists Vice Cooler, who comes up with something much starker. The Kim Gordon featuring “Close Up” is a prime example; a brooding, minimal piece full of innuendo. If the title wasn’t clue enough, lines such as “A privilege to visit my village” retell the story of the pleasures that lie down below in no uncertain terms.

If this seems oddly subtle for Peaches, it’s certainly not indicative of the rest of the album. This is Peaches at her rudest. “Dick in The Air” is an anti-misogyny anthem fuelled by casual sexism in hip hop videos, though the line “Shake our asses like we don’t care / We been shaking our tits for years / so let’s switch positions / no inhibitions” is spoilt somewhat by the childish chorus of “Balls and dick, two balls and one dick / balls balls / dick dick, balls and dick”.

“Sick In The Head” continues where “Show Stopper” ended on her previous album, the driving build up and punk rock attitude a swaggering re-imagination of Patti Smith covered by Chicks on Speed. The posturing on “Vaginoplasty” takes the big dick braggadocio of rap and twists it right round with outrageously explicit results, while “Light In Places” revisits the kind of throbbing disco pop that made “Lose You” on I Feel Cream such a climax. We don’t see this side of Peaches very often, which is a shame, as it’s something that she really excels in. It’s also a welcome break from the gynaecologically derived lyrics that pervade the rest of the album.

The highlight of Rub is “Free Drink Tickets”, a raw and unnerving track concerning thoughts of a broken relationship and subsequent revenge-lust, with hate fuelled lyrical emotion laid shockingly bare. The sluggish hip hop beat and pitched down, spat out vocals make for Peaches at her most intimidating as she re-empowers herself: “Congratulations on being the most evasive person I have ever known / I'm in so much fucking pain right now…I want you to feel it”. As the tale continues, the hate reveals itself in an incredibly dark way: “I wanna rip you apart with my bare hands / I wanna crush your bones”, the pause between the following line of “I want to….cut…..you” is genuinely terrifying, showing off Peaches mastery of storytelling, the story ends with the words “Drink up bitch”.

Five albums into her career, Peaches is as dirty as she ever was, and shows no sign of calming down.