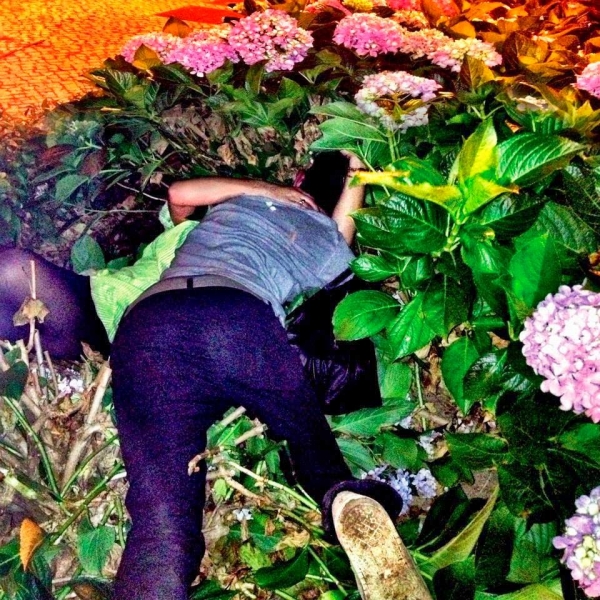 Paus, a four piece from Lisbon, revel in noise. They’re rock musicians performing something closer to techno by using robust drumming, electronic belches and synthesised atmospherics helping to add beauty to the chaos. This second album follows on from their masterful self-titled debut released back in 2011 and builds on the foundations put in place with it. They have two drummers (always a good thing, unless it’s The Glitter Band) who use something called a Siamese kit, two drum kits connected by a bass drum, so obviously it’s the forceful beat that rules here, creating a wall of sound which the rest of the band try to obliterate with all kinds of glorious noise.

The English translation of the word Paus is sticks. They share not only their name with London based Japanese noiseniks Bo Ningen (meaning: The Stickmen in Japanese) but they’re also kindred spirits in violent sounds. But where Bo Ningen are full of mystical Eastern promise, Paus is the sound of an overheated studio, the floor covered with broken glass from the whiskey bottles smashed against the studio wall. They don’t pre-record, it’s all done live in the studio.  This gives Clarao an unpredictable feel, like the best 50 minutes of an eight hour jam session, cut into tracks and made into an album. That’s not to say this isn’t a free flowing piece of work, they definitely knew exactly what they had to do to get the album sounding this good.

Among the bizarre samples, scathing guitar sounds, and keyboard dysfunction are vocals hollered in their native tongue which leave the message to the imagination of those who can’t speak the language. With that in mind, the hollered call to arms vocals on the furious “Pontimola”, a track that slashes as hard as Fugazi at their most belligerent, are probably not “Hey! Hey! We’re Paus, so dance or fuck you”, though it’d be great if they were.

Although the majority of tracks aren’t instrumental, they play as such due to most instances of vocal being heavily processed or gated, creating a stuttered effect which renders the voice as an additional part of instrumentation rather than conventional vocals. “Cume” is one example; the vocal is little more than a “waaaa waaaa” which perfectly complements the ravey synth line. “Bandiera Branca” again uses synths but adds fuzz bass and an almost regular song structure which thrillingly falls apart with the cacophony of white noise and 3/4 drum patterns which grinds the track into thrilling end. Klaxons - try to do this.

They can also do the atmospheric soundscape thing just as effectively. The dubby basslines and Spiritualized-influenced keys on the instrumental “Ambiente de Trabahlo” are given a psychedelic feel by the reverbed effect on the guitar riff, and “Premiera” is a marching take on take on techno, like Fuck Buttons overpowered by funk. For those who wish Fuck Buttons would peel back a few layers, Paus are exactly the kind of thing you’re looking for - their forceful groove will also appeal to fans of post rock acts such as Mogwai, Battles, Tortoise and Explosions In The Sky, but instead of the dreamy textures excelled by those guys, they inject an acidic spike that comes across as Steve Albini on a really bad trip brandishing a chainsaw, with a line in afrocentric guitar riff and a sore head. Each track is an exhilarating exploration of power, noise and rhythm. There’s so much to love here.