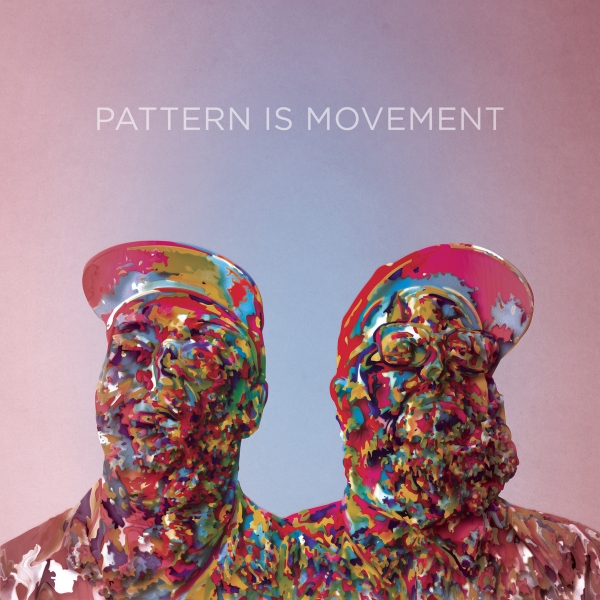 In one of Disney’s finest moments, Pocahontas deliberates between two streams that lead from an estuary, having sung-along to a wild, rapid river ride to emphasise how totally spiritual she is. “Should I choose the smoothest course, steady as the beating drum? …Is all my dreaming at an end? Or do you still wait for me Dream Giver..?” (Terms of no significance to this review have been removed… And there is some significance.) As highlighted by “River”, the opening number from Pattern Is Movement’s self-titled album, their fourth LP is made up of songs that follow more than one course. Songs that start out like dreams being given to listeners ears soon feel the force of the tide: With the aforementioned “River”, the bubbling undercurrent and calm, repetitive lines (“What if there’s a waterfall?”) suddenly overflow into a bass-heavy, almost reggae groove before being overpowered by a fuzz of a current.

In the time that it has taken the band to release four studio albums, the five-piece have been whittled down to just two. Rather than replacing those they lost along the way, Andrew Thiboldeaux (synth, bass and vocals) and Chris Ward (drums) have altered what once was a sharp, focused output to become a wall-of-sound made up of lights, textures and – naturally – patterns and movement. Elements of blues, soul, and even more Disney soundtracks (the playful flute to open “Little By Little”, which soon switches to a rhythmic duet between a deep whisper and robotic tones),the indie-pop of Bombay Bicycle Club (heard during the gentle shuffle of “Climb To Me”) and “before the disco” era Broken Bells (urban organs and jazzy drums in single “Suckling”) can be picked up here and there, but in its entirety it’s influences highlight a soundscape with an even wider screen.

While the percussion is usually the driving force of the songs, it’s beyond sparse during the first half of “Gone My Love”, adding to the dream-like atmosphere that the quirky electronics and layered vocals create. It’s Pattern Like Movement at their most poetic, with the title of the tracks repeated between altered lines of “your mouth moist and soft”, while angelic melodies like children’s toys and hints of strings and harmonica played in a juvenile manor add to this feeling of something playful. “Light Of The World” – which isn’t as bright as you may be lead to believe – is simarlily lacking in percussion during the bulk of the track, but soon makes up as a crash of cymbals accompany the horn-lead outro, while “Let’s Be Done” is a short, spacey slab of a song that booms when the skins are hit and merely brushes them elsewhere, in more than one sense.

The fact that Pattern Is Movement defies genres is both its strength and its downfall. While the almost “umpa umpa” style breaks of “Make It Right” are fun they never quite pluck up the courage to allow for a dance, and “Rum” hits the back of the neck and breaks down to an old reliable beat but could do with just a shot more to loosen the hips. “It took one step for everything to change. It’s a different colour” Thiboldeaux sings on closer “Wonderful”, and as the song goes, “there are things that you should feel wonderful about” throughout Pattern Is Movement, but perhaps the colours of the wind could have been painted a little too roughly during certain parts. There is hope for the future of the duo though… or perhaps it will take a one-man Pattern to deliver their shining movement.