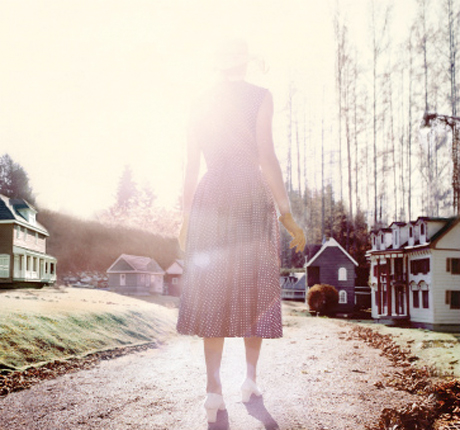 It’s staggering – nay, criminal – that Patrick Watson isn’t better known. 2006’s Close To Paradise was one of the decade’s strongest albums, meshing leftfield experiment with swooning melody in a way few artists would even attempt and at which almost all who did would fail. Alongside their sizeable list of critical accolades the band have taken the Polaris Prize – Canada’s version of the Mercury, only it actually means something – and were cited by Rolling Stone as one of the “can’t miss” acts at this year’s SXSW. If the success of artists was in any way meritocratic, then Watson would be a household name.

But hey – fame brings expectations, and it’s for the best that those are suspended here. Patrick Watson and his band make music that’s quietly confounding, understatedly ambitious – lilting piano that suddenly turns to evoke a haunted fairground, for example, and then the melodrama of a silent movie, strings cascading behind a spectral howl. Adventures In Your Own Backyard curbs the waywardness of earlier material a touch, perhaps – there’s nothing here as grandiose as ‘Weight of the World’ – but it’s still an incredibly restless work, reluctant to settle in any one place.

It opens with a whisper, with ‘Lighthouse’, an initially low-key somnambulance of piano and vocal lullaby that segues, without warning, into a Western; trumpets squalling with drama and portent. It’s a characteristic beginning, both delicate and slightly unhinged, as though the band tired midway of the direction and picked another out of a hat, and by rights it really shouldn’t work. And yet somehow it does, sidestepping contrivance or affectation to gain an otherworldly quality, fantastical yet sincere.

A large part of this is due to Watson’s voice, a palette of rich timbres that takes in the falsetto of Jeff Buckley and the twitchy hyperactivity of Devendra Banhart. On album standout ‘Blackout’ it dances, backed by instrumentation less concerned with making a song than carving a narrative, a soundtrack to some magic-houred and lens-flared montage of movement and sky. It’s most affecting when the rest is pared back, ‘Words In The Fire’ a play of melodies against simple guitar, like siren-song across a hazy sea.

There are lulls, sure – ‘Into Giants’, for example – but they aren’t so much flaws as breaks, semi-conscious pauses in the drift. As with earlier albums much of Adventures… has the quality of a dream, the highpoints hard to define and fading upon awaking. Some aspects don’t really go anywhere much, like closer ‘Swimming Pools’ with its cloudy ambience, but it doesn’t matter – this is an album less about grand statements than quiet eccentricity and romance, right down to the cover shot of a dawn-lit neighbourhood with its central figure indistinct against the sun.

With its suburban references and parochial title Adventures… invites a slight comparison with Canada’s primary musical export, but where Arcade Fire seem driven by great purpose and wracked by urgency Watson’s band appear indifferent to the world, their music dwelling in a half-light a little to the side of the everyday. As the choir swells around the lyrics of the title track with their tale of backyards filled with tall grass and the wild, we get a glimpse of somewhere else, wide-eyed and childlike and yet ever so slightly sad.

This is not an album that screams for our attention, but it deserves it all the same. Adventures In Your Own Backyard is ambitious without feeling overblown, intimate without falling to sentimentality and subtly, delicately compelling. Amidst the hustle and the bombast of our breathless and over-caffeinated hype-machine it’s likely to get a little lost, swept towards the margins by whatever hot new thing is stepping out that day – but you get the sense that it won’t care, that like the band generally it’ll be quite content blowing along all but unseen next to the shadows. And that, quite honestly, would be our loss.