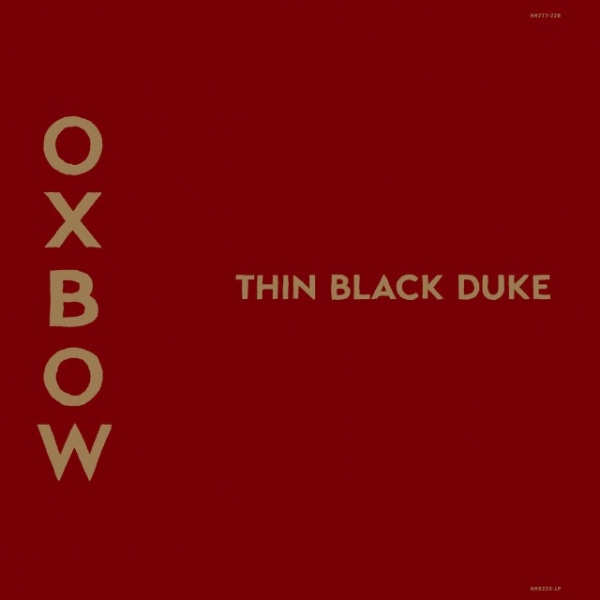 How nice it is to be able to write an article about a truly singular group.

In an age of unprecedented musical conservatism (for which, I’m well aware, music journalists must admit significant responsibility), the most determinedly anonymous proponents of which disproportionately tend to be guitar-driven “alternative” rock bands, it’s incredibly rare to stumble across a band who genuinely sound like nobody else on the planet at the moment. Still rarer are those artists who have maintained that distinction over a 30-year career, without once conceding to the uniformity which apparently swallows up many acts after their initial blaze of genius has been extinguished by the rigours of this fickle, ailing industry. So, from its announcement, I was dying to hear the new record from Oxbow, whose originality and cathartic power has not been compromised once since they burst from the ashes of Bay Area hardcore legends, Whipping Boy. The Thin Black Duke doesn’t disappoint.

Before I go any further, it should be made clear that this isn’t a flawless record. Some of Oxbow’s ideas don’t quite stick - some arrangements collapse in on themselves in (seemingly) unintentional ways, the occasional phrase jars upon these ears just that little too much – but when such errors come as the natural product of a restless need for invention and an unbridled ambition to access profundity via challenging, confrontational sound, they’re easily forgiven. That may sound condescending, but it’s really not intended to; that Oxbow can get away with the occasional misstep is simply a testament to the exhilarating effect that they consistently impress upon their audience.

The group is centred upon the relationship between frontman Eugene S. Robinson – one of the most physically and artistically imposing vocalists working today – and guitarist/arranger Niko Wenner. Although the sonic territory here is rather different, their tempestuous push-and-pull reminds me a little of the manner in which Nick Cave interacts with his musical foils – i.e. Rowland S. Howard in the early part of his career, then Mick Harvey, and latterly Warren Ellis. Wenner’s complex, confounding textures are provided with a commanding narrative voice by Robinson, whose haunted, feverish words are delivered with consummate eloquence. That Oxbow’s rhythm section – comprised of Dan Adams and Greg Davis – is so tight, so effortlessly capable of underpinning the wild peaks and troughs of each song’s progression, simply compounds the intensity of that central pairing.

Much has been said in the build-up to the release of this album about its embracing of timbres previously untouched by Oxbow – namely, string arrangements. Yet as subtle and well-placed as those strings often are (save for infrequent moments in which they do flirt with parodic melodrama, before swiftly recovering themselves), most of the time their most pronounced effect is to frame Wenner’s guitar playing in a sympathetic spotlight. To be fair, this might have less to do with any shortcomings in the string section than the sheer, breath-taking force of those guitars. Wenner really is an astonishing player, who wrings the life from his instrument, choking melody out of it like a thrashing animal. Every tortured line, every dissonant barrage drips with expression; to paraphrase that old Tony Wilson cliché about Joy Division, he sounds like he plays guitar not because he enjoys it, but because he has no choice – this music has to escape from him somehow.

Of course, no Oxbow review would be complete without discussion of Robinson’s lyrics. However, I don’t want to go too deep into that here, because more so than any of their previous work, The Thin Black Duke’s production, not just its compositional intention, foregrounds his words, which are delivered atop some of the most accessible melodies he has yet produced. Like all great lyricists, his words work best when experienced in their intended context, and I’m reluctant to remove them from that context for scrutiny here. Suffice to say, he’s a writer like no other, and he deserves greater acclaim than he receives. Naturally, one can extend that platitude to Oxbow as a whole. They really are one of our most exciting and consistent rock bands. The Thin Black Duke isn’t their finest album – for my money, that’d have to be 1995’s Steve Albini-produced Let Me Be A Woman – but it’s still one of the most thrilling, galvanising records I’ve heard in recent months.