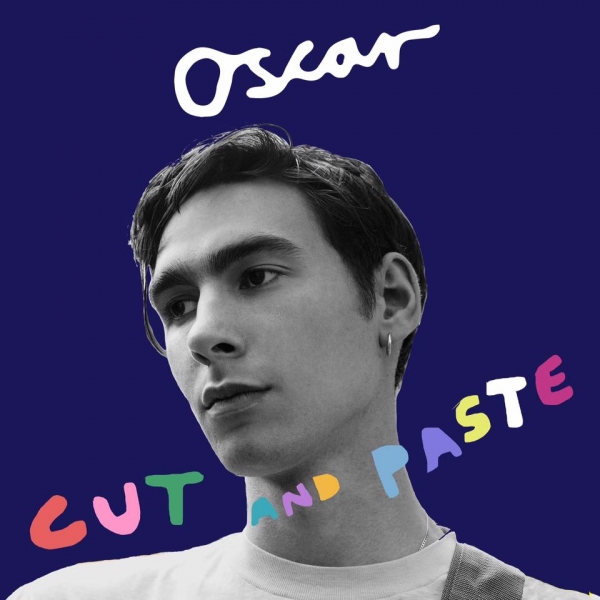 On last year’s Beautiful Words EP, Oscar Scheller cemented himself as indie’s new boy next door. He came across like a helpless romantic, channeling his misfortune into feel-good pop singalongs, with fresh-faced melodies so sweet and innocent they knocked on your door with Tesco tulips in one hand and a box of chocolates in the other, as they promised your parents they’d have you home by eight o’clock at the latest.

Oscar provides the very same sweet melodies here on Cut and Paste, his debut full-length album, but they come served with a cheeky wink and the invitation to slip into something more comfortable. Previously released single “Sometimes” opens the album, and takes over where Beautiful Words left off - it’s Oscar making his intentions clear from the start, as he takes his tie off and unbuttons his shirt after picking you up in his mum’s car: “Sometimes, only when I look at you, I know the things I wanna do/Always, always when you’re in my room,” goes the sliver-tongued, radio-friendly randiness of the chorus.

It’s not all about Oscar’s urges, though – the majority of the album focuses on the emotional side of love rather than the physical. While Cut and Paste may be a scrapbook made out of a variety musical influences - ranging from hip-hop (Oscar sampled Eric B and Rakim on an early track) to punk (his dad was in a new wave band called The Regents during the ‘70s) - collaged into something original by Oscar, it is essentially just pop music. And what makes it pop music is the fact that the album is a story of love told using simple lyrics.

But whether pop music is good or not depends on if the simplicity of the lyrics matters. On Cut and Paste, it doesn’t. The songs still have the ability to connect with you on an emotional level, due to how personal they sound – the likes of “Good Things” and “Beautiful Words” can make you optimistic, while others like “Only Friend” and “Gone Forever” can make you feel reflective. But it’s not the lyrics that do this, it’s the way the music - the synths in particular - sounds cautious yet wistful, combined with Oscar beautifully flexing his classically-trained baritone.

And the result is not good pop music, it’s great pop music. Good pop music is a cocktail of emotion and fun, but songs like “Be Good” and “Daffodil Days” are the sonical equivalent of a Jägerbomb on student night – there’s colour, a distinctive taste and a youthful energy to them. After all, It’s not just ordinary pop music – Oscar is a self-made bedroom popstar who largely produces the tracks himself, without the backing of a major label to guarantee him success. As a whole, Cut and Paste is familiar pop juice freshly squeezed, but with a strong DIY mixer and an aftertaste of eclectic influences.

The finished scrapbook that makes up Cut and Paste is something that Oscar claims took him three or four years to put together, with one track even dating back a decade. We’ve heard a lot of these songs before (“Beautiful Words”, “Daffodil Days” and “Breaking My Phone” have all been floating around for a while), meaning that this album feels more like an early greatest hits collection rather than a debut record, which is by no means a bad thing; when has pop music ever been about anything other than hits? And Oscar cutting and pasting his greatest hits on to the same page is what gives the scrapbook feel to the album, resulting in a nice nod to his DIY ethic.

Overall, Cut and Paste is a fine collection of Oscar’s old lemons made into lemonade – it’s refreshing pop music, but with a floppy fringe and a tote bag. Over the course of just 32 minutes, Oscar manages to try his hand at PG seduction (“Sometimes”), break his phone (“Breaking My Phone”) and crave mutual desire (“Feel It Too”) – by cramming so much emotion and activity into such a short amount of time, he proves that he’ll definitely have you home by eight.