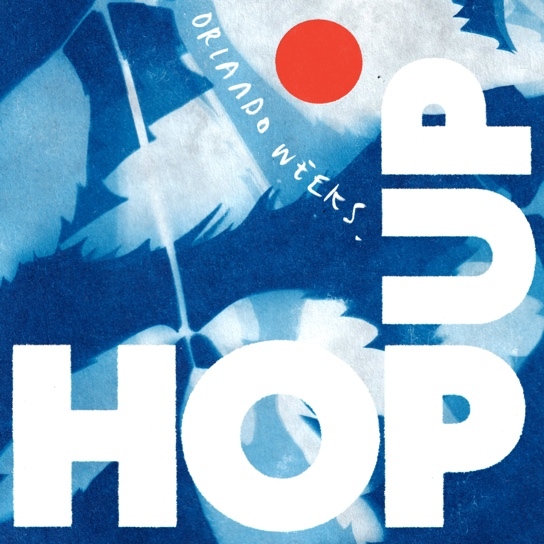 Overflowing with sincere joy, gratitude and an appreciation of precious paternal moments, Orlando Weeks’ second album Hop Up is a shimmering ode to parenthood. Brimming with an infectious optimism, Weeks has crafted 11 leftfield pop tracks that revel in
childlike curiosity and glee, cohesively and tenderly produced by Nathan Jenkins (Bullion).

Born from song-writing sessions at home and late-night recording in a studio in Peckham during 2021, Hop Up is the sound of an all-consuming love that embraces the joy of nurturing another life in an unusual and disjointed time. Listeners are bathed in the brightness of Weeks’ world from the genial sounds, the soft “ooohs” and whistles on opener “Deep Down Way Out,” and this warm feeling radiates with the help of The Maccabees frontman’s pure, idiosyncratic vocals.

Whilst his debut solo record A Quickening was heavily absorbed in the moments of excitement —and anxiety that came with new parenthood — on Hop Up Weeks invites listeners to share in the unfiltered joy of his reflections on such a unique time. Featuring contributions from Katy J Pearson, Willie J Healey and Ben Reed, the album marks a natural evolution in Weeks’ songwriting, weaving his personal experiences into a record that chimes with a tender and sincere charm.

“When I hold you / I let go” he muses on “High Kicking” revelling in the freedom and the purity of a shared “good time” over lilting xylophone notes. Weeks sustains this dreamlike quality throughout the record, managing gently break it occasionally with moments of irresistible, funky alt-pop on tracks like “Make You Happy” and “Look Who’s Talking Now”. His simplistic lyrics and buoyant melodies allow space for unexpected joy, even though Weeks has mentioned that the delightfully named “Big Skies Silly Faces” was loosely inspired by his own inner critic, and “the very English absurdity of making the most of a situation. The desperation for any potential silver lining.”

There’s nothing about Hop Up that feels desperate though. It blossomed from a desire to acknowledge the simple pleasure of living in the moment, and for Weeks in particular, that means taking full and immeasurable pride in parenthood. A time capsule of love and a wonderful piece of musical heritage for his son Tomo, as well as an optimistic set of alt-pop lullabies to dream along to, Hop Up lives up to its buoyant name, carefree, poignant and a tonic of testing times.