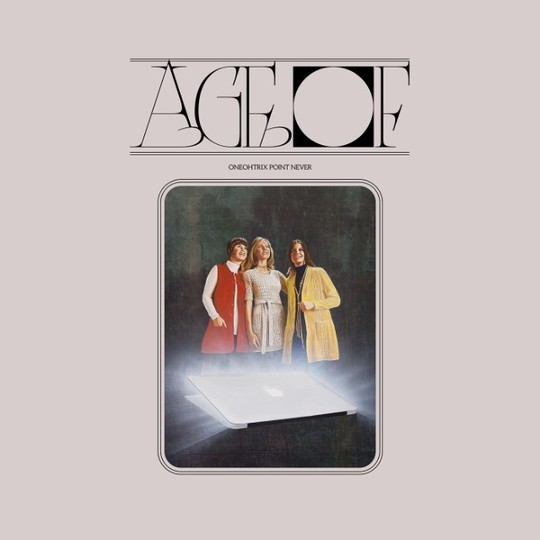 Oneohtrix Point Never is Daniel Lopatin’s far-out experimental electronic project. OPN’s rise has been exponential in recent years, marked by recent releases on Warp, an award at Cannes Film Festival (Best Soundtrack for 2017’s Good Time), commissions at the Tate Britain, Frieze, and NYC’s Museum of Modern Art, amongst others.

Drawing a following that spans noise-art chinstrokers to synth-pop fanatics and beyond, much of OPN’s appeal can be attributed to his ability to consolidate emotion and intimacy within a kind of techno-dystopian nostalgia. Heavy sampling and sound manipulations congeal to create intensely evocative pieces, which can escalate from quiet poignancy to more frenetic, sometimes abrasive, sound collages.

Many will have clocked OPN’s intoxicating, texturally rich productions on his Rifts compilation or his last album, 2015’s Garden of Delete. The latter was inspired especially by his time touring with Nine Inch Nails and Soundgarden, as well as personal reflections on his angst-ridden experiences as a teenage adolescent. The album was the soundtrack to an intriguing semi-fictional world that plummeted fans as well as Lopatin himself into a hyper-reality of cryptic cyber communications and fragmented narratives. Fans traced clues and artefacts littered across the web to piece together the enigma of Garden..., as it quickly took on a life of its own as a sort of performative, reactionary art piece that not only critiqued digital culture, but also was simply a great album. As confessed to The New York Times, “the dumber the thing is, the more excitement I get from imagining a very complex world of truth around it” – inadvertently or not, Lopatin’s pseudo-conceptual pieces allow for humour and satire, yet strangely give his works some kind of external substance outside of the music itself.

His latest long-play, Age Of, is a slight, yet significant, departure from his previous albums. In a recent interview with The Ringer Lopatin admits that his focus was to “keep things feeling like there’s room for everyone. Not people that like electronic music, but also my cousin, and people who have no idea what it is that I do” – no easy feat for an artist who publically aligns themselves with a philosophy of stylistic formlessness. However, this aversion to defined genres and musical references gives Lopatin the sort of artistic liberty he actively seeks. Part of this development has been aided by a host of fruitful collaborations on this album that include James Blake, ANOHNI, Prurient (Dominick Fernow), Kelsey Lu and Eli Keszler.

At a glance, Age Of is an exquisitely balanced album, suspended between pop sensibility and quirky experimentalism. Tracks like "The Station" – supposedly an Usher collab that never quite made it – are basically pop tracks, but listen elsewhere and you get the twisted ruptures of "We’ll Take it", "RayCats" and "Age Of". But, as alluded to before, each track can’t really be pinpointed stylistically (“It’s just to reinforce a very defined belief of mine that I’m not really one thing”); vocoders blend with static noise, and other bizarre yet amazing instrument arrangements ranging from MIDI harpsichord and horns to electric bass and sizzling synth drones. As ever before, Lopatin still revels in every opportunity to “freak people out” with his warped and tastefully gnarled electronic hybrids.

Reportedly written in an “amniotic egg-like AirBnB in Massachusetts”, the album is loosely based on a theory found in The Fourth Turning, a book written by William Straus and Neil Howe that outlines four different epochs, or ages: the Age of Ecco, Age of Harvest, Age of Excess, and Age of Bondage. Following successive evenings musing over 2001: A Space Odyssey, and the work of Steven Spielberg and Pixar, Lopatin began to hypothesise a point at the end of time at which an artificial Iotelligence is suspended between the future and nostalgia, and “tries to imagine what it was like to be stupid, to not understand anything”. The album’s live incarnation has been translated into OPN’s new show, entitled Myriad, which was premiered at New York’s Park Avenue Armory as part of Red Bull’s annual music festival there.

There are some stunning moments throughout the album, all threaded together with a masterful touch of arrangement and sequencing. The album’s eponymously titled opening track sets the scene with distinctive MIDI harpsichord runs (reminiscent of Garden of Delete’s "Sticky Drama"), before distortion opens up fissures in the sonic space. The sound is wide, epic, fatal, with complex textures interweaving to create an almost regal, elegiac prelude to the rest of the album.

Like many of the pieces on Age Of, the tracks don’t sit in the same place for too long, often presenting unexpected detours and novel developments. There are a couple of interlude tracks that help to segment the album such as "Manifold" for instance, a preamble to "The Station". It features seconds of static ambience before a final synth statement bursts in, as if an after-thought. This kind of pointillist production style applied throughout paints with a melange of influences that jigsaw together in a seamlessly disjointed manner; describing his music with a paradox in this way only seems fit for OPN, a master shape-shifter. The OPN sound is holistic yet sprawling, using multiplicity as a mode of identity.

Aside from the chaotic spectacle of his arrangements, it feels like the underlying merit of Age Of is Lopatin’s real mastery of pacing; something that’s present in pretty much all OPN albums but especially on point here. Alongside track order, these formal considerations give the album a really powerful sense of narrative, and one of the strongest aspects of Age Of is the way OPN lets this story unfold.

The album’s structure is meandering, mercurial, fluid, its tempos and moods fluctuating intuitively from start to finish. ‘Toys 2’ features the more anthemic qualities of OPN, an uplifting synth hook glides above a bed of synth details and dotted percussion, whereas "Black Snow" is more melancholically downbeat and resigned: “Nothing comes out of the Black Snow … What’s at the bottom of a black hole? … Nothing but a bunch of unanswered questions lately.”

The album approaches its apex with "Warning", an undulating tension builder that grows with MIDI choir and unsettling vocal whispers (“warning, warning, warning”); leading into the industrial, heaving "We’ll Take It", topped with radiant horns, synth and keys toward the end. As co-producer and mixer, James Blake’s hand in the album’s sound can be heard throughout via the meticulous song-writing and arrangement (something Lopatin gives him credit for); it’s almost unmistakeable in "Same", the album’s climax point featuring hallmark JB chord progressions and arrangement, plus vocals from Anohni.

The tracks’ detailed arrangements are almost symphonic at places, but no matter how elaborate and eccentric they get, listeners are consistently guided by catchy ornamental melodies with which the album is replete. It’s this powerful juxtaposition that makes Age Of so compelling as an album.

OPN’s latest long-play is just as much a satisfying experience as it is at times unsettling and disorienting, by the end you do actually feel like you’ve been told a story. What he does so well is he draws people into his world; you’re subsumed into these morphing aural tapestries before you even realise it, suddenly you’re part of this whole movie. Tried and tested, Age Of is an album that gets better with every sitting. For something that attempts to be "astylistic", the perceived absence of centre is a kind of illusion. Underneath the layers of chaos is something substantial and beautifully refined.