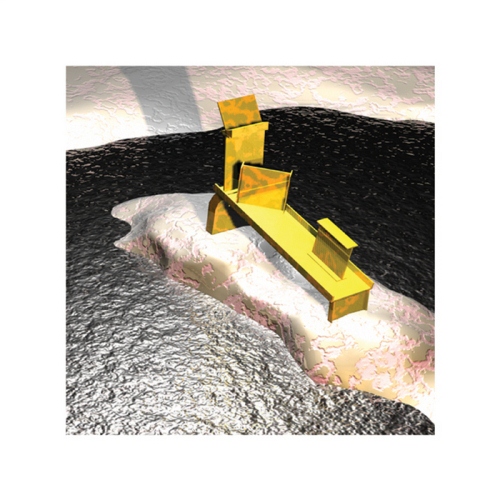 One of the most inspiring things about music in the Internet age is that genre is on its way to becoming an anachronism. Walls everywhere are falling down, and nowhere is this more apparent than in contemporary classical music. Continuing the legacy of Reich, Riley and Glass, the past decade has produced classical music graced by glitches, beeps and beats – and consequently, pianos and string quartets finally find themselves the right side of cool. More often than not, however, composers have been the ones doing most of the boundary-bashing, whether through the output of labels such as Erased Tapes, or Fat Cat’s classical imprint 130701. This split LP from NNA Tapes bucks that trend. Coming from two producers with a background in electronic music, yet who see themselves more as composers than beat-makers, it’s an exciting prospect.

Daniel Lopatin (a.k.a. Oneohtrix Point Never) handles Side A, and fills it with a highly experimental 22-minutes, where protracted passages of white noise are tempered by chopped vocal samples. It’s an ambitious piece, but even its warmest aspects – the constant chatter of fragmented speech, for instance – can become quite irritating, and the continuous swellings of noise that take the piece to its crescendos produce a sound akin to the malfunctioning of every printer in your area code. It’s hard work.

Yet, with 2011’s Replica, Oneohtrix Point Never created one of the best loved experimental albums of the year, a fantastic example of why “difficult” music continues to excite – making you feel as if you have discovered something personal within something that initially seemed a bit messy, as if you have rebuilt the music yourself after an explosion that blew it apart. The simultaneously direct and indirect nature of organised chaos can be a moving experience, but on Music for Reliquary House, a title that refers to a home for holy religious relics, there is an enduring sense that Oneohtrix has expanded his palette and diluted it at the same time.

In contrast, On In 1980 I Was A Blue Square Rene Hell takes aspects of Reliquary House but uses them as a means to enrich a more familiar classical landscape. ‘Prelude to the Bridge’, the forceful centrepiece of Side B, is what Michael Nyman would have sounded like if he had scored Blade Runner instead of The Piano. Granted, the synthesised strings do sound occasionally nasal, at times resembling some of the more squeaky Hollywood soundtracks, but in general In 1980 I Was A Blue Square is something to immerse yourself in. A computer-generated partner to the music of A Winged Victory For The Sullen, it challenges tradition whilst not being afraid to respect it.

At a time when it has been statistically proven that popular music is sounding more the same than ever, experimental music is proving itself to be more interesting than ever, continuing to confound the restrictions of genre and throw up music that sounds genuinely different. What we can learn from this record is that when you go knocking down walls, you can never know what will be in the rubble.