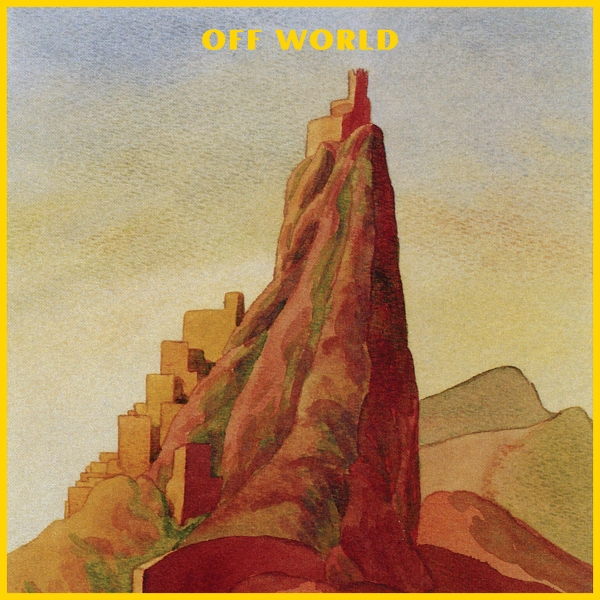 A string of distant transmissions from a sea of uneasy tranquility, there is indeed something a bit off-kilter about the world of 1.

Off World is a collaborative undertaking started by Toronto-based musician Sandro Perri, who has over the course of this young century released a diverse range of music under his own name as well as his Polmo Polpo alias. 1 is the first (naturally) of a planned series of three Off World records that will clear out a teeming cache of unreleased material that Perri has recorded over time with numerous colleagues. The album came into being after an impromptu summit in London arranged at the suggestion of producer Drew Brown (Beck, Blonde Redhead) which included himself, Perri, Susumu Mukai of Zongamin, and MJ Silver of Mickey Moonlight, and culminated in a recording session gathered around a small fleet of vintage synthesizers.

The sepia-toned squeaks and R2D2 jazz scatting of “Primitive Streak” flit about over a vibrating void. Surely this is what the Mars Rover hums to itself on its lonely fact-finding strolls across the Red Planet. Space isn’t just an allusion on 1, it is a guiding principle. “Old Brain” overlaps modulating synth loops without pouring much else in between. The brief “No Host” is freestyle but communicative, like the musical call-and-response sequence in the climax of Close Encounters of the Third Kind.

The stoic sci-fi soundtrack demeanor doesn’t crack much, but there are shoots of warmth on the closing “Wonder Farm” when organic instrumentation takes root on the artificial turf. It’s a gentle swerve and perhaps a tantalizing indicator of where the next installments in this series might lead.