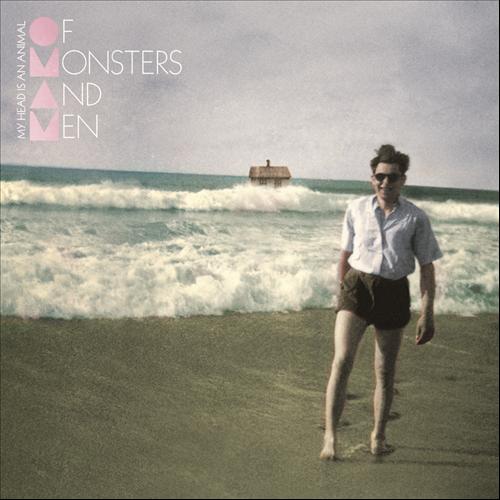 Overshadowing fellow countrymen Björk and Sigur Rós in terms of chart success, Icelandic sextet Of Monsters And Men have been riding high on the success of their debut, My Head Is An Animal, for almost a year, wowing their home nation and penetrating the US with ease.

It’s strange to think that Britain has missed out on such a globally present record, only now getting an official release six months after continental Europe, considering the rich musical culture ever-spewing from this archipelago.  Of Monsters and Men floored audiences at SXSW this year with their belligerent stream of cutesy yelps and brass squawks, topped off with a sweet vocal relationship between male and female leads, Ragnar þórhallsson and Nanna Bryndís Hilmarsdóttir.

‘Dirty Paws’ is an intrepid slow-burner, starting subdued and soaring into an arena-sized bonfire of melodic lusciousness, and dotted with spatterings of “HEY!” barked deep from the lungs of the entire band. It’s all very Greenpeace-friendly, as the group wax lyrical about talking trees and birds and all that floral jibber-jabber, as native Icelandic bands tend to do. Sugary cut ‘Mountain Sounds’ gallops forth, led by a syrupy synth line and featuring a sanguine chorus which just punches you straight in the diaphragm, but in a good way so that you’re left beaming with hope.

Part of Of Monsters and Men’s appeal is in the back ‘n’ forth serenading from the singers, who belt out with such optimism and pure talent that, at times, the record feels like a string of cheesy duets from decades past. But the forced Broadway-esque spontaneity is fine. The kitsch appeal of a good singsong endures to this day, and there’s a reassuring warmth emanating from the synchronised harmonies.

Breakthrough hit ‘Little Talks’ is dominated by jaunty horns which careen through the track, proving gluey hooks and a sense of youthful triumph. It’s one of the more uptempo efforts on My Head Is An Animal, and with such a blatant festival sound, it’s destined for bigger stages. ‘Love Love Love’ cools things down. There’s a focal acoustic guitar, and stargazing keys which point to the nocturnal outdoors. Hilmarsdóttir’s pipes waver, sultry, over the whole effort, and it’s the first time that her male counterpart is noticeably absent, leading to a much calmer atmosphere and less of the rabble-rousing sound which blankets the rest of the LP. It’s a campfire number, a breathtaking contrast to their normal noisiness.

Of Monsters and Men have little to prove with the release of their album in the UK, their success already evident both in the domestic market and overseas, with the band having broken the notoriously tough American charts and won over the hearts of Iceland by reaching number one there. Though they may not be out to prove much, they certainly do. This is a resounding success of an album – equal parts delicate emotion and unabashed fun – which sows the seed for a long and prosperous career in the field of twee-rock.

Listen to My Head Is An Animal