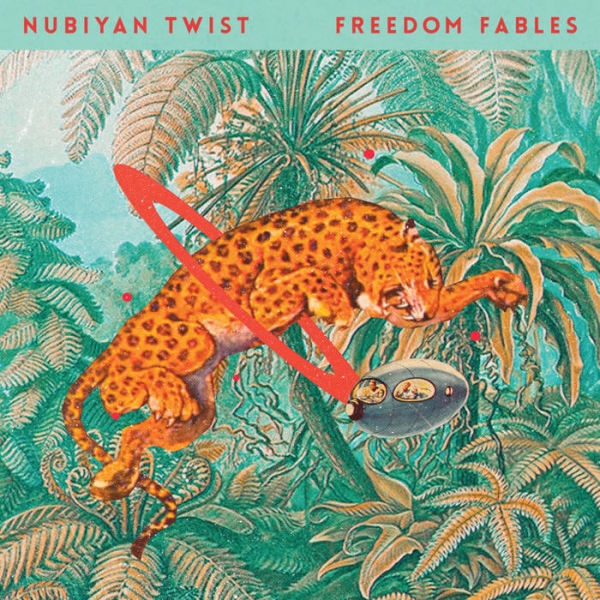 Collaborations are a staple part of the music industry. They’re a chance to show off who you’ve got in your phone book and get a bit of cross promotion in. Expanding your fan base to new areas, while always keeping the focus on you. Rarely does the featured artist come to the forefront.

For London-via-Leeds’ Nubiyan Twist, the opposite is true. It’s always about the guest; letting them take the spotlight and slipping into more of a session band role. So far, it’s helped them create records that scour the globe for rhythms and melodies designed to make you move.

Freedom Fables is yet more of that magic. A transportive journey through the African musical diaspora, from the Ghanaian highlife of “Ma Wonka” to the foot-stomping dancehall of “If I Know”. No matter where in the world the ten-piece want to take us, their stunning ability to adapt their sound with ease makes each trip seamless. Channeling jazz’s cooperative spirit to help them unlock a constantly shifting, high-energy vibe that powers the record.

“24-7” and “Flow” feature all the smooth neo-soul grooves of any of Erykah Badu’s finest, while “Tittle Tattle” opts for a more malevolent, often ethereal, funk. It’s to their strength that Nubiyan Twist themselves manage to retain their own sound and identity throughout, even if they are mostly acting as a conduit for the ideas of their collaborators, from Ego Ella May to the legendary Pat Thomas.

Much like their last album Jungle Run, however, Freedom Fables doesn’t quite work as a cohesive whole. The depth the concept promises, of finding connections between each collaborator’s narrative (their own freedom fables), is somewhat lost.

But, as with Jungle Run, it’s not that much of a mark against the record. As they zip from dancehall to neo-soul to more traditional jazz, it’s easy to get swept up in the pan-global party vibes. These are the sounds of a group who’ve been playing together for years just doing what comes naturally to them, even if that means there’s no solid thread throughout. A patchwork quilt of disparate but incredibly well executed and captivating ideas.

It’s a sacrifice that pays off because Nubiyan Twist and their cast of collaborators are so adept at what they do. Bouncing off each other, and melding genres while still always feeling like a Nubiyan Twist record. Creating an album that’s satisfying in it’s playful and oh so funky breadth, if not it’s depth