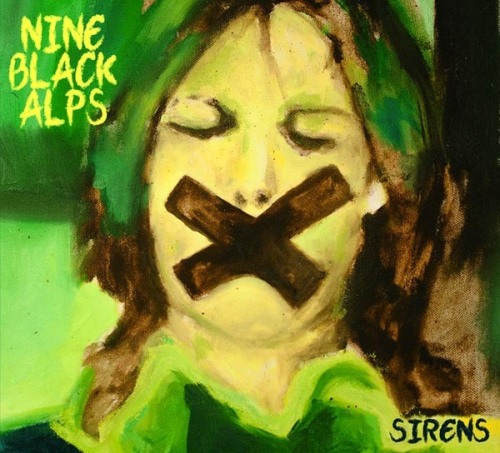 Not too long ago, Manchester’s Nine Black Alps were making a big noise both on the stage and in the studio. In a short space of time they have managed to switch from raising hell as crafty punks on Island Records and piping an easily-digestible yet uncannily visceral version of grunge into our lugholes, to introducing a number of gauche mainstream elements and, consequently, falling in and out of a number of contracts. Suddenly, a band with the world at their feet were to be found wallowing in ’60s-tinged indie rock music; conjuring killer and filler in equal measure. Their throwaway Facebook biography sums up their progress with the line “Still around, somehow”. When I interviewed them three years ago, they had just been dropped by their label when on the verge of releasing their third album Locked Out From The Inside – the title being a possible dig at said label. Trust me when I say, every word they spoke hung heavy with feelings of anger and resentment. It appears that their existence continues to be a day-to-day struggle. So can fourth album, Sirens, along with new bassist Karl Astbury (ex-The Witches), help them find the path back to fame and fortune?

Judging from the formulaic structures that lurk inside, it appears the answer is sadly in the negative. Shuffling rhythms and uninspired, cyclical patterns that pool around repeating choruses bring to mind a mixture of Sub Pop-friendly modern americana, rattling grunge and wispy summer pop. The album’s swathe of weak material like the Arlo-esque ‘Be My Girl’, the clumping ‘Hand Me Down’ or the speeding Nirvana homage ‘Living In A Dream’ are fine examples of a band operating on auto-pilot. I could go on. There’s an air about all this that reminds me of The Subways’ slow decline into merely repeatedly chewing on tasteless blueprints. Perhaps, like them, they really have run out of crackers to serve up – that well of imagination and songwriting talent isn’t quite as deep as we once thought.

As with their last release, when they shake it up by injecting either venom or subtle emotion, the song structures begin to open out and Sam Forrest’s vocal performances suddenly finds a way to pierce the skin. Just the introduction of an edge of fuzz into the production for ‘Don’t Forget To Breathe’ or the emergence of a dark tone and keen edge for ‘Phosphoresence’ and, suddenly, kinetic lines like “Home is where my dead body lies/Sleeping safe till I’m paralysed” or “Fallen buildings with no sound/Buried faces on the underground” begin to appear. The stripped production and clanging guitar tones clearly don’t instantly convert this into an edgy album, but they certainly add something to those structures that boast a more complex design.

Ironically, their live perfomances remain iconic, even if they do feel a little like reconnecting with one’s own 20-year old disaffected youth. The point is, their music is always going to struggle in a music scene where exploration and innovation are everything. Sadly, Sirens is yet more proof that they are still resisting the urge to invent. If this album achieves one thing, it proves in fleeting moments that the band do have a dark side. I’d love to hear them dig even deeper; swap summer for winter a whole lot more. Until they power down and let that evil seep in, they will continue to struggle.