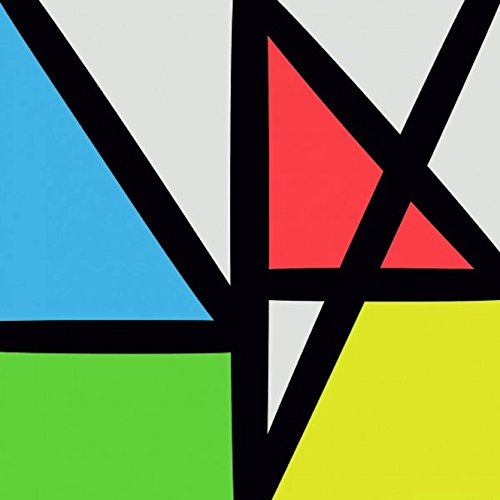 Since New Order’s zeitgeist-defining Technique struck number one in 1989, it’s fair to say much has happened to New Order.

The most recent big of big news was the departure of low-slung bass viking Peter Hook - since 2007, he’s been stamping his foot so loudly that even undiscovered Amazonian tribes wish he and Bernard Sumner would kiss and make up. It’s split the fans like a divorce, and Music Complete arrives from beneath the shadow of a man with a bass guitar at his ankles.

Of course, New Order are a band versed in survival. If they were a pub, the band would be purring in the Saloon bar, listening to the rather polished lead single “Restless”. Meanwhile, Hooky would be in the public bar, muttering to anyone who’ll still listen, that the current album is actually Music Incomplete, and that the band should be renamed without him.

He’s taking the band to court over their use of the New Order name, conveniently forgetting he was part of a New Order that recorded the underrated Get Ready (2001) and Waiting for the Sirens’ Call (2005) albums without keyboardist Gillian Gilbert, yet without requiring a rebrand. Her return to the fold, and their immersion in the electro-landscapes of the past can be no coincidence.

Hardcore fans dislike the change, and the bottom line is New Order are not the fiercely mysterious band of the ‘80s, refusing interviews, excluding singles from albums, insisting on shambolic live appearances on Top of the Pops and discouraging band photos. Their early mystique was almost unbearable. Even the songs were simply attributed to ‘New Order’, leaving it so unclear who did what that it was uncertain if even the band knew.

Thanks to the demise of Factory records, financial worries of the Hacienda and London Records’ rinsing 1993’s Republic of singles, a shell shocked New Order went to ground until 2001, reemerging with their more guitar-based sound. Thus, in many ways Music Complete is the follow up to Technique that never happened

It’s impossible to know how Music Complete may have sounded with Hooky, but Sumner argues the band is greater than the sum of its parts, like only someone surviving a change of line-up can. However, it’s unlikely the ducking and diving Italo-disco and deep-voiced intro of “Tutti Frutti” could be any more bonkers. It’s the excitable cousin of Technique’s “Fine Time”, with more synth drops than a drunk roadie and an anthemic hook. It’s the tune most clearly echoing their playful past, and of the sort Mute Records probably signed them for (it certainly wasn’t for Sumner’s lyrics, which generally benefit from only vague scrutiny these days).

However, the strident bass lines of Bernard’s ex-school friend remain, albeit now played by newcomer Tom Chapman in the most thankless task in music. And talking of the music, what were they thinking in making the yacht pop of “Restless” the single? It’s serviceable, but beyond the distinctive drumming, the loudest noise was fans convincing themselves that things sounded promising.

Thankfully, the fans can relax and listen to the music do the talking. The neon-lit Hi-NRG midnight drive of “Singularity” shimmers with competing squelches and bleeps, even if any anticipated earth-shaking bass lead melodies never arrive, while the Donna Summer/Georgio Moroder propulsion of “Plastic”, with ecstatic string stabs and echo of ancient strobes, keeps things back on track.

Later, the rockier “Academic” flirts with their own Regret, and is an effortless strut through all that’s great about New Order, with Peter Morris’ itchy drumming on fine form like he’s a one man mission to keep the world turning. Why this didn’t continue their recent tradition of blistering lead singles needs to be dragged through the courts once Hooky has finished.

“Walk the High Line” comes across like Chic, which as the house pianos pound in and La Roux echoes the good time lyric, you might wonder what Ian Curtis would have made of it, had he not been a disco fan. Sumner sings “I can’t get any higher”, like a man dropping another pill before suddenly remembering a job interview in a few hours’ time. Then, as the luscious textures, and niggling synth lines retreat, the bass swings into a funk, yes, funk, workout, it’s impossible not to grin.

The biggest surprise is the gravelly, unapologetic lust for life of Iggy Pop’s spoken lead on the soundtrack-esque “Stray Dog”. You can almost hear Sumner grinning in the background, as the moody synths and strings burble in a whirlpool of animalism and hazy mornings spent grasping for last night’s enlightenments. There’s even shoe-gaze country with “Nothing But a Fool”, reminiscent of Electronic’s unexpectedly affecting cover of Blind Faith’s “Can’t Find My Way Home.”

Things lose focus towards the end, with clumsily titled “Unlearn This Hatred” sounding like something left off Lowlife, and probably rightly so. “Game” initially gropes to justify its inclusion, although its niggling guitar line flirts so outrageously that it’s hard not to succumb (though it isn’t helped by Bernard reaching the back of his lyric notebook: “Higher than the sky”, anyone?). Elsewhere, the percussive “Superheated” sees Bernard too hot and oversleeping, presumably to find his fuel bills higher than the sky. Its wistful autumnal tones could have suited a slower tempo, but it’s a grower, confirmed by the affecting Brandon Flowers being given the final word, saving the song from obscurity with the gentle lullaby coda of “Now that it’s over”.

Stephen Morris recently rated his best New Order albums, which he obviously got completely wrong. For a start, Get Ready's synth-fused rock is far better than people seem able to admit. However, the differences between the before and post-Factory records are undeniable. Yet this is the first New Order album for a long time that sounds like it could only have been made by them.

There’s no denying Hooky’s unique influence on Joy Division and New Order, but it’s hard to imagine Music Complete being any more inspired than it is by a man who envisioned bass player super-group Freebass as a potential retirement plan. Although at least court cases over that name are far less likely.

The embittered fallout between him and old school friend Bernard Sumner will be dug up by Manchurian archaeologists for years to come, and sadly, Peter Hook might even be right; that this bunch aren’t New Order without their distinctive talisman, but ultimately it’s so flabbergasting how a band of such heritage is having so much fun that people may not actually care.