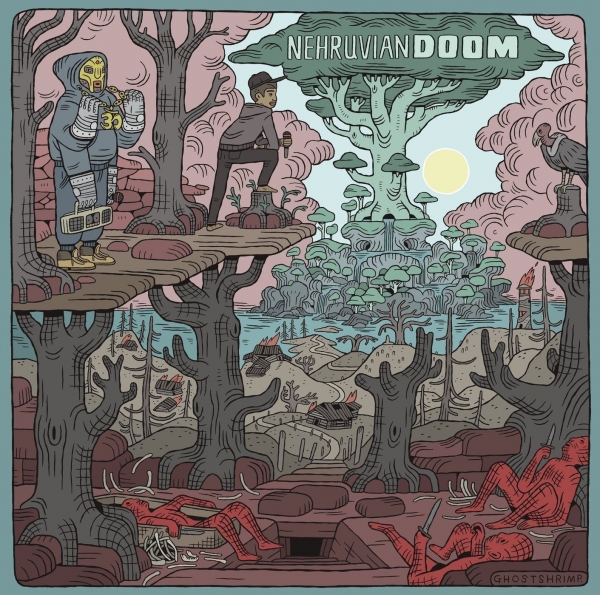 Does alt-hip hop have a more revered veteran than MF DOOM? And is there a more hotly tipped teen rapper than Bishop Nehru? It’s hard to answer either of those questions affirmatively. DOOM’s peerless back catalogue is testament to his masterful command of nuanced, inventive production, entrancingly lethargic flow and articulate, witty lyrics. Nehru, on the other hand, has whipped up quite the media storm for himself by virtue of his passionate, open style and a self-assurance that belies his young age (he only recently turned 18). So after a string of more casual collaborations, what will their debut collaborative LP, NehruvianDOOM, add to their respective oeuvres?

Well, don’t expect to be too surprised. From the outset, NehruvianDOOM is a capable, cogent LP, with some excellent production, tasteful samples of film and radio dialogue and inventive distribution of vocal duties between the two artists. “Om”, one of the tracks released ahead of the album’s release (back in July), is arguably the best showcase of those three things; propulsive, urgent percussion combines with a moody, descending samples to form a highly effective foundation over which DOOM and Nehru flex their considerable lyrical and vocal muscles in satisfying fashion.

This is in sharp contrast to the following track “Mean the Most”, in which Nehru takes centre stage. Though his flow has a certain undeniable maturity, his lyrics let him down somewhat (“satisfy your needs”; “you mean the most baby” – hardly groundbreaking stuff, is it?), and this is not helped by production that falls a little short of DOOM’s usual, excellent standard. With its rudimentary beats and slightly intrusive horns, it lacks some of the subtlety over which DOOM normally has such admirable command. It’s not horrible, but it’s certainly less enthralling than one may expect.

In some ways, that last sentence could be extended to apply to the whole LP. Everything here is nothing less than well produced, or well rapped, but there’s nothing particularly new or inspiring on offer. “Caskets” has summons up a certain ominous, eerie charm, but DOOM has had menace more or less covered since he started his career. “Disastrous” features some lovely, J Dilla-esque moments, but it’s hard to escape the niggling feeling that it would work better without the competent, yet predictable, rapping over the top, at least if the instrumental ebbs and flows were explored a little more.

There isn’t much that’s actually wrong with NehruvianDOOM, short of a slight lack of imagination. There’s certainly nothing offensive, at any point. But there’s little that really grabs the listener, like Madvillainy did, nor anything that is similarly striking by virtue of its soothing smoothness, like the stunning previous DOOM/Nehru collaboration “Elder Blossoms”. Had it been released by a lesser pair, this album would doubtless by hailed as full or potential, the first LP from a vital new force in alternative hip-hop; however, as it has been released by these two, it falls jarringly flat when one considers what they’re capable of.