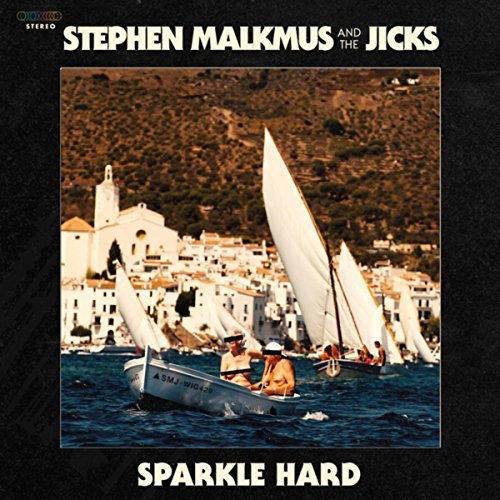 You’ve not come here to be told who or what the titular Malkmus has done previously, right? You just want to see a liberal sprinkling of your favourite adjectives, which may include (but are not limited to): woolly, chilled, relaxed, cool. Also maybe the odd “vibe” and a “slacker” or two, right?

Cool. Stephen Malkmus & The Jicks’ new record, Sparkle Hard, is all of that and so much more. The last couple of Jicks records – Mirror Traffic and Wig Out at Jagbags – were both minor masterpieces that came close to equalling the work Malkmus had previously done with his other band. Wig Out was particularly impressive thanks to its rhythmic dynamism (“Lariat” in particular) and increasingly focused songwriting.

The fun continues throughout Sparkle Hard: there’s a comically jarring moment when “Bike Lane” opens up sounding like a vibraphone-less version of Edwyn Collins’ “A Girl Like You”, before Malkmus rights the ship – and refashions the riff into something resembling hog-riding biker rock. Only it’s presumably about bicycles. The barroom glam of the chorus is a winner, too.

The staccato rhythm and autotune foolery of “Rattler” is another signature Malkmusian stunt that he actually manages to pull off – primarily due to the searing lead guitar ripping the shit out of everything. It also helps that the autotune is less Top 40 and more Commodore 64.

The fuzzy blast of “Shiggy” (an album highlight) and the Dylan-esque flavours of “Refute” are equally thrilling. Especially when fucking Kim Gordon shows up to add a bit of glamour to the record.

On this form, Stephen Malkmus really can do no wrong. Indeed, it’s hard to think of a time when he’s ever been involved in anything that was less than excellent, never mind average. Sparkle Hard continues this unfeasibly strong run he’s been on and adds a little more bang for your buck. He’s now released one more album with The Jicks than he did with Pavement, and he’s showed no signs of letting up. This album is just another jewel in his jauntily-angled crown.

Thank God for Stephen Malkmus, and may we all sparkle hard.