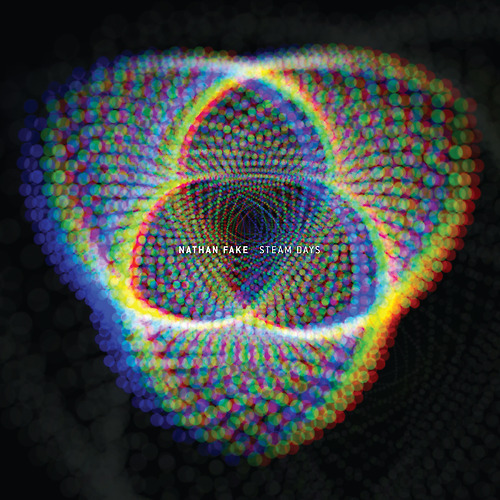 Since his arrival on the electronic scene Nathan Fake has spat out techno gems – like 2003′s classic single ‘Outhouse’ – and two impressive albums which have both tackled dancefloors and challenged the genre. Though electronic music has drastically changed over the past few years, the Border Community mainstay has resisted the obnoxious trend of electronica artists (and, with Korn and Muse’s recent revelations, rock bands) hurtling down the road of “trendy” dubstep. On his third full-length, Steam Days, Fake has managed to (almost) avoid the allure of blah-wib-wobbery and stuck rigidly to his tried and true recipe for affecting, euphoric techno that has proved so popular over the past decade.

‘Paean’ opens the record, with a trance-like synth riff providing a vintage Orbital sound and a ridiculously catchy hook which is sure to burrow deep inside your brain, only to be revived at some inopportune time. Rhythmic exercise ‘Harnser’ stands out as powerful experimentation, which features a heartbeat synth traversing scales and providing both the melodic line and the bass harmonies. It feels improvised, instant and is a vibrant break from the swooning, all-encompassing dream-techno. Second track ‘Cascade Airways’ breeds organic and synthetic percussion for an infectious rhythmic polyester, something reminiscent of second album Hard Islands‘ club-infused belters.

It’s often hard to know where one song ends and another begins, as the dulcet tones of aquatic synths smoothly fade in and out of each other throughout the album, creating a seamless listen which at first allows for a truly submersive experience from Fake. Unfortunately, the very thing that makes Steam Days a wonder to listen to also makes it rather monotonous. The interlocking tracks phase through each other almost unbroken, and what starts out as a blissful, shamanic river of noise quickly deteriorates into sluggishness – especially after the initial “wow” factor has worn off.

First official cut from the album ‘Iceni Strings’ bubbles forth into a vast realm of aural pleasures, brought about by seductive synthesizers floating, almost detached from the rest of the sound. There’s a hearty blob of bass strung underneath the ambient electronica which creates a “flowing” motion through the sound so that the techno sensibilities – of which we have come to rightly expect from Fake – survive in some form.

There are moments of glory in ‘World Of Spectrum’ as bullish bass swells over the drums to touch the fringes of dubstep, and when Fake ventures outside of his comfort zone on ‘Rue’ to craft a percussion-free synthscape it’s impressive; but the majority of the album is along the lines of what Fake has already shown us. It’s good, very good, but not the fresh material we’ve known him to brandish in the past.

Dubstep may be a corny route for Fake to take, but it’s probably time to delve into some post-millenial sounds, of which there are scores top pick and choose from – last time we checked, it wasn’t 1998 any more, and techno just isn’t as exciting as it was at those drug-addled raves. That said, there are some nuggets of awesome – ‘Iceni Strings’ and ’Paean’ are pristine examples of Fake’s trademark sound and are genuinely brilliant listens, while more experimental efforts ‘Harnser’ and ‘Rue’ dive straight into the kind of thing we wish Fake would do more of. Steam Days will tide over his devout fans, and will probably win him more, but it’s not the strident genre-subverter we’ve come to expect from him.