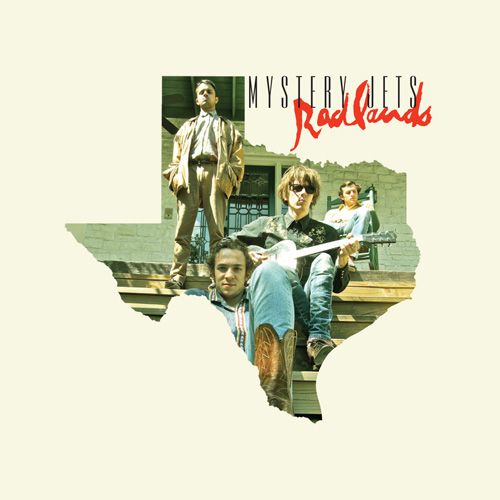 You can’t escape 2012: double dip recessions, the running and jumping, and of course Queenie. Good old Liz, 60 years of monopolising stamps celebrated with street parties, flag waving and a big gig with Elton John. But like bloodlines’ inevitability, we’ve had it all before.

Rewind 35 years to the destitution, racism and an opinionated left of the ’70s, with the Silver Jubilee’s street parties, flag waving and the Rocketman. At least then there was a cultural shift in the air and the kids were united. Punk had just broken and, to commemorate Betty, The Sex Pistols released ‘God Save The Queen’. The establishment received a one-fingered salute, and parents ran scared.

Unfortunately, punk’s cultural shift, nor rave’s, rap’s or anything else progressive, didn’t get as far as Eel Pie Island, so Mystery Jets weren’t informed about modern music. Hence the creation of their fourth LP Radlands, eleven songs of AOR radio rock which even the Dukes of Hazard would find acceptable. No longer fuelled by ramshackle charm, they’ve pledged allegiance to the flag.

The problem with Mystery Jets’ quirkiness was always that they were just a bit out of step with… everything. When their nice boy indie first emerged they weren’t as cool as The Rakes, and too fey for The Cribs. Then The Maccabees and Bombay Bicycle Club, started creating genuinely progressive indie-rock and even sodding Noah and The Whale cornered the Radio 2 unit shifter demographic. They’re the geeks who never quite fitted in.

Their latest attempt to carve an identity takes Mystery Jets to the truck stops of small town America: a sensible option. The beardy Americana thing’s still hip with the kids, there’s a resurgence in classic rock, and people take Fleetwood Mac seriously: marketing-wise, retro ’70s is a winner. Sadly Radlands is as vintage as the Urban Outfitters catalogue and just as clean cut.

Their relocation to Texas has certainly had an impact. “I went to the desert cos I wanted to find my pistol/I wanted to find out what if feels like to be invincible/But a man I met said boy you ain’t seen nothing yet” sings Blaine Harrison like prep-boy playing a game of cliché bingo (desert? check, pistol? check, stranger? check), yearning to be accepted by local rednecks who still use 8-tracks and wear caps. It’s the Eagles circa 1976, with connotations of serious men making serious music, and as exciting as a straight interstate highway, topped with a Bachman Turner Overdrive quote.

There’s a sense of humour in places though – why else would the spit ‘n’ sawdust disco pun of ‘The Hale Bop’ be seen as a good idea? – or the epic ‘Lost in Austin’ with its ELO flamboyance. Radlands is undoubtedly a brave record, no other band has aimed to achieve the status Jefferson Starship and the decision to adopt a genre as flavourless as soft AOR, and make it their own, can only be commended.

To prove they know more than just ’70s soft rock the band namecheck a battalion of other people’s records on ‘Greatest Hits’, like the guy from the BT advert who’s desperate to impress the girl housemate by streaming Duran Duran’s greatest hits. It’s their edgiest number as they call the BBC “fucking idiots” at the start before launching into what is essentially Steelers Wheel’s ‘Stuck In The Middle’.

They key to Mystery Jets’ appeal is their ability to create a rabblerousing anthem from nowhere. ‘Alas Agnes’ and the phenomenal ‘Two Doors Down’, are indie disco mainstays, and Radlands‘ lead single ‘Someone Purer’ achieves the same feat. There’s a gothic bass and a tremolo riff The Edge would be proud of, framed in cymbal crashes, and “woah ohs” while Harrison pleads “give me rock n roll”. It’s Radlands’ punch-the-air moment.

Whether it’s the John Mellancamp feel of ‘The Ballad of Emerson Lonestar’ or the Tom Petty-tinged ‘Radlands’ there’s a classic song-writing at play on Radlands, which is both daring and eager; a final plea for acceptance. It’s a make or break album for Mystery Jets, which could see them lead a wave of transatlantic rock which they have strived so hard to master. Or it could see them on a double headline tour with The Kooks.

In a world where the Occupy movement is taking hold, and there’s disaffection on the streets, Mystery Jets are flying the anti-rebellion flag. Essentially Radlands sounds as though punk never happened, and if the soft dad rock of the ’70s is the sound the kids are into nowadays then I despair. After all Mystery Jets are the band who need their dad as a member to make them interesting in the first place, and now they’ve carried on their bloodline and turned into him. It’s taken a while for Mystery Jets to discover who they are, but finally they have, and they’re coming to a CB radio near you. God save the past.