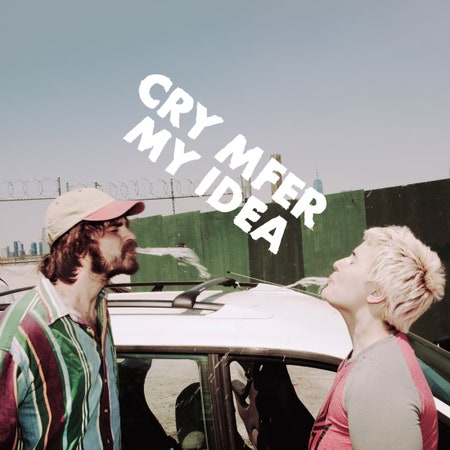 Breakup albums are such a damn cliche, especially those that retrospectively toil in the aftermath to pick up the pieces. The entire concept needs a good ol’ nip and tuck. Enter Lily Konigsberg and Nate Amos, the duo known as My IDEA.

Two artist minds who have frequently collaborated in the past, Konigsberg and Amos decided to document their inevitable dissolution and the realization that being more than friends wouldn't ever work.

By living in this messy tension in real-time, the debut record from My IDEA pushes against the conventional post-breakup narrative always told – embracing the persistent disarray, brushing through its coarse shrubbery and wreckage while licking shared wounds obtained along the way.

Hearing a record of two, once intimately involved with one another, traverse the trepid waters of their rift should be an uncomfortable experience for anyone on the outside looking in. However, the duo offers space to observe and eventually succumb to their unyielding world of emotional frankness and unexpectedly diverse style along the way. This combination is candid enough to keep discomfort at bay, but it also provides a sense of home through its relatable pain—because whose house isn't a bit dysfunctional?

The title track is the captivating preamble to this brisk but emotionally abreast project, wherein the second verse, the record's essence can be captured by Lily's assertion that "In this place / Nothing ever lasts / Circumstances bury what your heart's saying". Slightly abrupt in tone, futility imbues Konigsberg's words from the get-go and soon into a majority of the record, even unwantedly so.

"Crutch" doesn't let up on the ever-present regret and longing either: "silence, sadness and pain" Hearing these words spoken over the most blissful of dream-pop instrumentals with a delusionally joyous tone is actually quite devastating, but it's a moment that poignantly televises the confusion that's inevitable when relational strain goes on longer than it should.

Not every emotion expressed through CRY MFER is necessarily doom and gloom. There's victory declared in Konigsberg and Amos helping each other quit drinking, and there's even a bit of horniness and humor too. Amid the regret and remembrance that pours often and heavily into this record, other natural feelings flair up that can't be said more straightforwardly than on "Breathe You." Simultaneously glitchy and unpolished, Amos delivers his first substantial singing contribution on the record with an unflatteringly vocodered hook, "I can't wait for the next time I get to / Fuck you / Yeah I know it's kind of cool, but still I / Fucked this up." These lyrics sound awkward and unbecoming on paper but are actually quite charming when considering how nuanced and complicated this relationship seems.

There is some sense of resolution to this record, even if it may not be the kind invested listeners want. The most understated and unrefined cut from CRY MFER, "Not Afraid Anymore," is the moment Konigsberg and Amos appear to come to grips with where they stand relative to one another and as individuals. It's an example of acceptance that instills hope no matter the end in sight.

A simple rolling piano ballad that emotes joy with wry banter and mumbled ques interspersed, there's a comfort found in the matter-of-factness of Konigsberg's plainly-put lyrics and reassuring voice. "I'm going to write you a song / I'll try not to make it too long... you're not around anymore," Konigsberg accepts but then follows with an unintentionally revealing aside, "You see, I don't get the timing."

Though the track is sandwiched right in the middle of the tracklisting, the placement of "Not Afraid Anymore" encourages listeners to save their tears for different matters. Why? My IDEA made this record for themselves – now, two best friends – to exorcize the tumult and make amends with what could've been. Again, this is no ordinary breakup record; it's a turbulent reflection full of complexity pointing toward hope – that farewells don't have to end in goodbye but could evolve into something deeper and more meaningful.