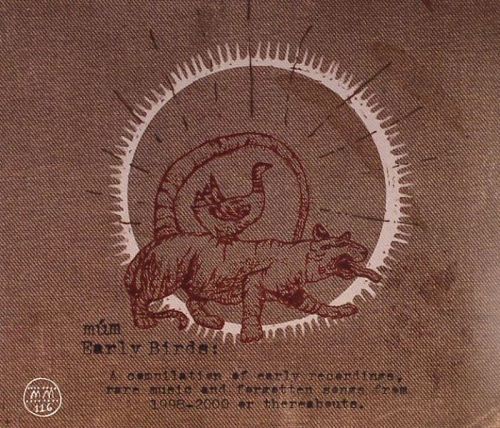 There’s something about the phrase “Icelandic folktronica” which screams “Post-Bjork gimmick” – but múm are no such ploy. Despite the challenges of an ever-shifting line-up, label changes, increasingly silly song titles (‘The Smell of Today is Sweet like Breastmilk in The Wind’ anyone?) and economic meltdown in their home country, múm are made of sturdier stuff than their giddy, cowbell-heavy pop ditties may suggest. And with 5 albums, three EPs and a Peel Session tucked under their (colourful, hand-woven) belts, it’d be churlish to fault the band for indulging in a celebratory retrospective.

To even the casual listener, múm’s musical evolution is fascinating stuff. They started life in 1997, as the brainchild of Icelandic duo Gunnar Örn Tynes and Örvar Þóreyjarson Smárason, who made sparse, strangely charming musical exercises on cheap four-track tape recorders in each other’s bedrooms. Their sound was soon fleshed out by a number of talented players in the fertile Icelandic music scene, reaching an apex on the superb ‘Finally We Are No-one’ and ‘Summer Make Good’ – both breathtaking marriages of the willful strangeness of earlier releases with new-found linear pop sensibilities.

Since then, múm’s have been progressively veering towards the more pop side of things – their fourth release ‘Go Go Smear The Poison Ivy’ featured a gurning, demonically twitterpated facsimile of their previous sound, and following album ‘Sing Along To Songs You Don’t Know’ was more of the same: in recent times, múm have sounded less like a band of rabble-rousing pop ingenues, and more like a particularly rambunctious episode of Cbeebies. The brooding, briny intrigue which masterfully curtailed the whimsy of previous releases has sadly been sanitised.

So for those of us disillusioned by múm’s recent releases, a retrospective doesn’t seem like such a bad idea. The first half of Early Birds encapsulates múm’s talent for conjuring up a yearning for childhood memories you didn’t even know you had. ‘Gingúrt’ and ‘Bak Þitt Er Sem Rennibraut’ both sound like arcade games malfunctioning in the best possible way, and the zippy hair metal guitar solo on the latter is tastelessly endearing, redolent of the tinny, pre-recorded backing tracks on toy keyboards and guitars.

However, it’s the second half of the compilation – featuring more contemplative tracks – which truly stands out. ’0,000orð’ is a gorgeous, string-laden wisp that reminds us how purely beautiful múm can sound, while ‘múm spilar la la la’ is a delicate two-step of jangling bass and ethereal accordion, showcasing Tynes and Smárason’s underused knack for melding seemingly incongruous musical textures to harmonious effect.

While Early Birds is essential only to the hardcore fan, it is by no means completely unnecessary. It provides an intriguing insight into the formative years of a shape-shifting band full of sheer talent. And while change is good, as Early Birds attests, sometimes the past is even better.